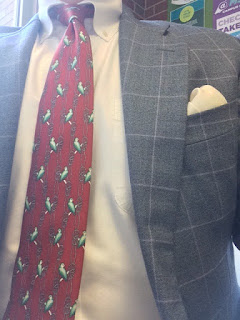 Today's upper half during a quiet early morning coffee in the library here at MSU, fearing a Hickey-Freeman sports jacket and one of my favorite critter ties, brought to me by ol' Mom and Stepdad back in 1995.  They summered that year in Trento (where Stepdad taught some courses for the U.N.) and Milan while I house sat back here in the U.S. and took care of Mom's parrots during their absence. Not an easy job.  The tie came from a haberdashery in Milan. 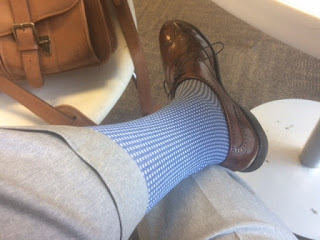 A new pair of Dapper Classics cotton socks along with gray gabardine dress pants and trusty old pair of Allen Edmonds shoes that have been in the rotation for about six or seven years. 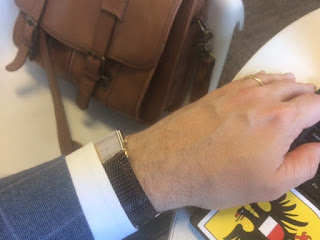 A nice shot of the wrist and hand, obscuring the corner of my laptop and Luebeck coat of arms.  WHile I have three wristwatches in fairly regular rotation, I keep coming back to this one by Seiko, a birthday gift from Mom and Stepdad way back in 2002. 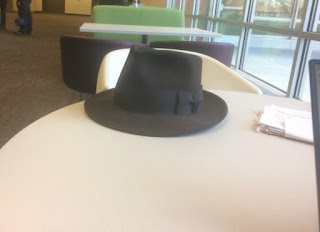 The fedora from Optimo Hats of Chicago (the 'Dearborn' model) has more asymmetry, a pronounced droop slightly off center and over the left eye, than is apparent in the photograph.  It makes the hat ideal for wearing it at a rakish angle, which is the only way to do so as far as I am concerned.


Having some pure fun with several things in my closet this sunny, cool Spring day in April.  It's almost a bit too much, but not offensively so.  Or at least I don't thinks it quite strays into used car salesman territory ca. 1975.  The hat never fails to garner favorable compliments from casual passersby, usually from members of the female persuasion, and double takes from the boys, who probably chuckle as we pass.  What can I say?  I'm just oblivious.

Popular posts from this blog

Heinz-Ulrich von Boffke
I teach a variety of literature and culture courses to university undergraduates.

A staunch advocate of classic adult male attire similar to that worn by my father, maternal grandfather, and the men like them: educated white collar professionals shuttling between Manhattan and the Philadelphia exurbs, or the Chesapeake Bay and the Carolina coast during the summer. Back when boys entered, accepted, and even embraced adulthood on graduating from college. Executive expense accounts were plentiful. Air travel was still glamorous. And people still realized the need for and importance of putting their best foot forward in all respects. Even when at home on the weekends. As my mother and grandmother used to say, "The people you live with are every bit as deserving of the social graces as those you meet in public. Now go back upstairs, brush your hair, and wash your face!"