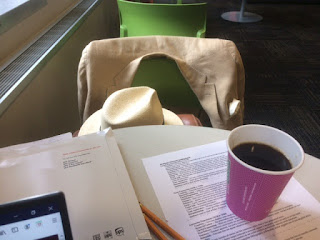 The upper half early today while working through the first student projects delivered this semester/term in one of the dormitory 'neighborhoods' where I teach a course on Henrik Ibsen and social problem dramas.  Not visible are a mid-blue and dark red striped cotton poplin button-down collar shirt and a silk herringbone necktie also in a shade approximating dark red, maroon, or perhaps bergundy. 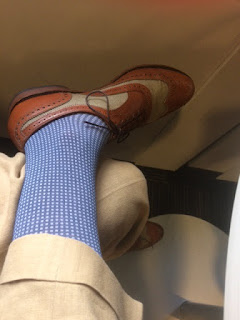 And the lower half.

Can you believe that it is already October 1st?  Where in the world did September go?  Lest you think Autumn has arrived here in Mid-Michigan, the temperature is quite warm right now (mid-80s Fahrenheit), and it is, to say the least, sticky.  A perfect excuse to trot out my linen suit one final time this season along with the Panama hat and spectator shoes.  Breezy and cool to wear, which is a good thing because even with air-conditioning and ceiling fans on high, classrooms become rather close with 40+ student bodies writhing within.

What's that?  Linen and a Panama hat a whole month after September 1st?  I know.  I know.  A totally gauche rube.  I should be so ashamed.