Where Does One Find Scintillating Conversation in 2020? 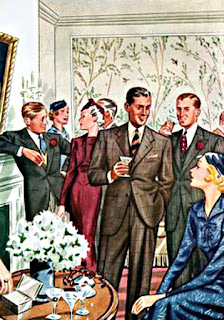 A 1937 cocktail party rendered, I believe, by the late illustrator Laurence Fellows.


How do you and yours go about compiling the guest list for a gathering in your home?

My own observations over the years suggest that, at least here in Middle America, few give much thought at all to a guest list when planning such an event.  People simply invite anyone and everyone they might know with little forethought as to how different guests and personalities will mix.  Or not as the case may be.

I’ve largely given up on accepting invitations to dinners and parties during the last three years or so, much to my wife’s chagrin and annoyance, because so many in the academic sphere, while they can hold forth ad nauseam about their narrow subjects, are more challenged when it comes to general (and, frankly, more interesting) chit-chat.  In a word, it is excruciating.  And sometimes difficult to avoid or escape once these types attach themselves to you early in the evening.  The related concept of 'mingling' is also as dead as a doornail.

My wife hates it whenever these kinds of subjects come up between us.  But she has posited that this degree of social awkwardness stems from the fact that many traveling through, within, and orbiting around academia self-select and enter into it because, while perhaps reasonably book smart, they are more comfortable sitting in an isolated archive somewhere writing dissertations, journal articles, and books, than they are seated around a dinner table in the company of others while enjoying a delightfully prepared meal that transcends mere sustenance.  It’s one possible explanation.

My own view is rather less innocuous, so I'll keep it to myself.

In any case, the default topics of conversation at almost any gathering I've been to in the last five years -- holiday parties, brunches, lunches, dinner parties, and the like -- either focus on children, pets, or the weather.  Often to considerable length.  Really.  Like the firm handshake, genuinely interesting, engaging, and entertaining conversation — while I am sure it must still exist in pockets here and there — now seems to be something of a rarity regardless of the social situation in which you might find yourself.  When you encounter it on those rare occasions, interesting conversation shines like a beacon in the night.

In a way similar to that other rarity, well-mannered children, when anyone demonstrates some skill in the lost art of conversation and actually remains engaging for longer than a couple of minutes, he or she stands out in 2020.   And let’s not even broach the issue of elegance in appearance, thought, taste, or speech among our fellow guests.

Oh, sure.  People mumble through mouthfuls of finger foods now commonly referred to as "snacks" and talk AT each other, usually while looking at the iPhone in their hands, but these interactions are hardly what you might call scintillating.  Certainly, they are not memorable.  My old mother refers to this particular phenomenon as the social tape loop.

No.  It seems many or even most of us in the 21st century simply fill the air with an ongoing monologue of inconsequential prattle that invites a collective nodding of heads and those rather overly enthusiastic, forced titters if something even remotely amusing is uttered.  You know the kind thing I mean.

And then there is the heartier version thereof from those more unhinged members of the group.  Alcohol may be involved, but it is not entirely necessary.  'Lampshade Time' can, and often does, happen when people are completely sober.  I have an aunt like this, and the ongoing performance has been difficult to witness from across the room for the more than 35 years since she married into the family.  "Good God almighty!" as my late maternal grandfather might have exclaimed.  "Who is that dangerously unbalanced woman?"

Returning to the point at hand, where does one find interesting conversation in 2020?  Your guess is as good as mine.  I no longer know.

You’ll pardon my frustrated state of deep-seated social ennui I hope.  It was very different outside of Philadelphia, where I spent my formative years and young adulthood, although I failed to recognize it at the time.  Shame on me for expecting more than the commonplace norm to which we have fallen when it comes to social interactions that might, just might be construed as pleasant, and leave us wanting more by evening's end.  It’s that dirty word ‘privilege’ I suppose.

guy said…
I think the answer can be in the last place you are actually expecting. I do quite a lot of masonic and rotary dinners/functions. Some can be fairly dull but in the last 3 days I have sat next to a retired RAF air vice marshal who after his military career was involved with UK D notices (ie preventing the press printing information which may be harmful)and last night next to a retired metropolitan police office whose hobby (and now part time job) is collecting and selling military medals. This started for him as a young boy when he was given his grandfather's WWI medals. The storyline behind the medals helps ie he was telling me about one set from a police officer who got one for fighting the Mau Mau in Kenya and before that he was blown up but thankfully uninjured in the King David Hotel in Jerusalem.

For everyone like that at other events I have been stuck with someone who wants to bore me rigid with talk about how marvellous their children are or football. Thankfully in masonry and rotary all talk about politics and religion is banned.

Anonymous said…
So true, Heinz-Ulrich. I have the privilege of attending one party each year at a friend's home, where the guests wear back tie, and the food, drink and conversation are all several cuts above the norm. Otherwise, things are much as you describe, the occasional lunch or dinner with a friend or two being welcome exceptions. My wife and I do not entertain at home very much any more, and tend to dread most invitations to the semi-obligatory social obligations that we all have. The topics of food and drink, recent travel, and the like are innocuous and can often be entertaining for a bit, but the passions or politics these days transform many conversations, even on books or movies, into mine fields.