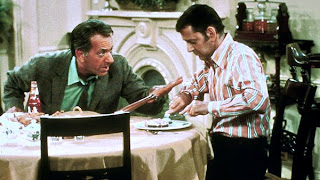 The late Jack Klugman (as Oscar Madison) and Tony Randall (as Felix Unger) as The Odd Couple, the TV version of the roles made famous a few years earlier onstage and in film by the late Walter Matthau and Jack Lemon.

Sometimes, you have the oddest thoughts where you immediately remark to yourself, "My God!  That's right!"  In his day, TV's Oscar Madison was considered a lovable though  inveterate slob.  Yet, he usually dressed miles better than most guys do in our own time 40-odd years later.  Even when he wore plain old khakis, a gray sweatshirt, and tennis shoes.  Guys?  What the hell happened us?