How might we introduce more elegance and style into our daily lives in 2016 and beyond? 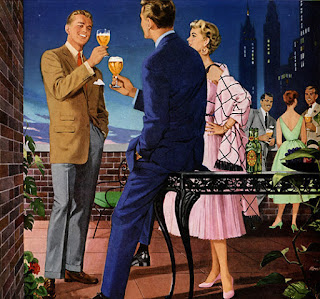 An old ad for Ballantine Beer.  I have only witnessed beer consumption this glamorous once, or maybe twice in my life.  Nothing against the beverage itself, and I enjoy the occasional glass with a good brat and saurkraut, but usually, occasions that include beer do not resemble anything close to this idealized scene from 1954.

How might we easily and effortlessly introduce more elegance and style into our daily lives in 2016 and beyond?  Here are just a few brief suggestions:


1) Instead of sitting around the house in sweat pants, cargo pants, or pajama bottoms most of the time, how about adding a few pairs of corduroy jeans for the winter and a few pairs of khakis (long, or short depending on the season) for the warmer months?  It's not going to kill us to look a bit nicer even when we are behind closed doors.  Let's keep up appearances even if only for ourselves.

2) I'll bang the ol' drum again since this is clearly such a challenge for so many in the 21st century.  Table manners, table manners, table manners!  I was reminded of this point when we joined a colleague of my wife's (along with that person's immediate family) for lunch on New Year's Eve.  The invitation was very gracious, yes.  But, um, it was not a comfortable experience sitting across from and next to the people involved considering that everyone but the husband behaved as though he, or she was at a trough in a barnyard.  Yuck!  At the barest minimum, a) chew with your moth closed and don't smack your lips, b) don't talk with your mouth full, c) keep your napkin in your lap and your elbows off the table, d) sit up without hunching over your plate, and e) sit still without tapping/bouncing your foot if you are an adult, or swinging your legs if you happen to be a child, and don't drift into some else's space while at the table.

How can ANYONE argue with these basic points?  Yet people take issue with the idea of manners (around the table and in daily life) all of the time if, or when one is foolish enough to raise the issue.  I understand that it is not polite to tell someone directly that he, or she is rude, but jeeze Louise!  How can people achieve high levels of graduate education (and enjoy an essentially upper middle class income and lifestyle), read widely, travel around the world, live other places, rub elbows with all kinds of other interesting people in their work, and ostensibly teach culture to young, undergraduate minds without acquiring at least a veneer of sophistication themselves beyond their particular, rather narrow field of expertise?  Basic manners are part of that sophistication like it, or not.  Clearly, a terminal degree doth not a charming personality (or, indeed, family) make!  As has been pointed out here before (by a reader), the poorest people can, sometimes, be the most polite, interesting, and charming.  By the same token, the most privileged and moneyed can, likewise, be the most crass and boorish in their behaviors.

3) Keep your living space picked up, put things away when you finish with them, and stop decorating your abode like some kind of hyper-masculine, overgrown college kid on his own for the first time.  In other words, lose the teenager's room/ dorm room/ first apartment/ man cave aesthetic forthwith and pack up. . .  no, GET RID of the unframed posters taped to your walls along with the miniature NFL helmet collection, and other assorted college and professional sports tschotschkes.  It's high time to cultivate a bit more sophistication where your interior decorating is concerned Bubba.  I suggest starting with the Masculine Interiors website.