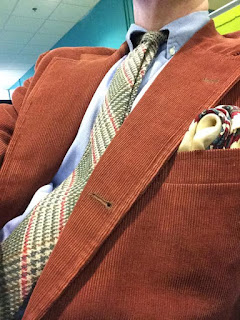 My look of the Week for the week ending on February 5th.  The upper half of my get-up this last Wednesday.  I don't always think to snap a photograph of my clothes, but the thought actually occurred to me during early morning office hours as I read next week's crime thriller, and I happened to have my I-phone handy and fully charged.

Sad news this week.  It seems Billax, the man behind Wearing the Ivy  League Look Since 1958, has decided to cease writing/publishing his blog due to the annoying activities of a serial plagiarizer, a person who has, apparently, done the same on/in other online fora.  Even more amazing, and if I understand correctly, the offending individual is actually  a journalist of some kind by trade, someone who should know better.

The whole situation is disheartening in the extreme since Billax had interesting things to say and an equally interesting, highly readable, and educated way of presenting them.  His blog was one of the best so called 'style' blogs out there, from my vantage point, thanks to these unique qualities.  He was actually present during the last hurrah of Ivy/Trad in the late 50s and early 60s, giving his observations an added layer of authenticity and veracity.  And then there was his great taste in clothes, shoes, and accessories.

We have never met, of course, and did not know each other personally, but we left comments on each other's blogs once in a while, and, despite the 20 or so years separating us in age by my estimate, I felt like we were kindred spirits in our approach to dressing, living life, and how we view the world.  The style blogging world is poorer without Wearing the Ivy League Look Since 1958.

So, for the time being at least, I'll borrow a page from Billax's book (at least until his return?) and occasionally share my own 'Look of the Week' if and when there has been an ensemble of items that I've managed to combine especially well.  You may, or may not always agree of course.  In any case, here is my Look of the Week for February 1st through 5th, 2016.

Finally, the week ended on a brighter note, when one of my male students, an Engineering major no less,  paid me a compliment on whatever it was I had on Thursday afternoon as he left the room at the end of class.  As I have mentioned before here at Classic Style for the Average Guy, I dress for myself at this point in my life, but it always adds a spring the ol' step if, or when someone says something nice about it during day to day interactions.  The moral lesson for today?  Say something kind to someone else once in a while. 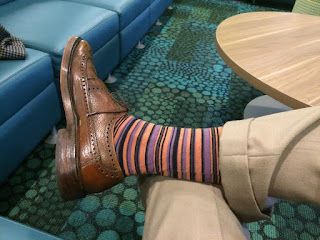 And the lower half.  Calmer socks would have worked better given the  necktie and jacket on top, but these are what I grabbed from the sock drawer in the early morning darkness, and you could not see them when I stood up before a roomful of undergrads.  The pants, by the way, are one of two pairs of wool twill ones Corbin, both in slightly different shades of tan, that I found together in my old best thrift/charity haunt two or three years ago back in Central Illinois.  I don't wear them nearly as much as one the several charcoal or mid-gray pairs of wool flannel pants in my rotation, but that means they last and remain pressed a bit longer.  It is also nice to have something to pull out that you don't wear all of the time.