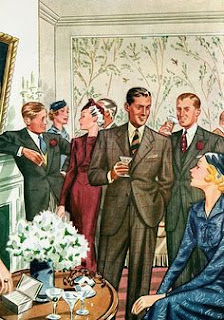 Yes, it's May 1st everyone.  So, why not celebrate quiet refinement and sophistication with an old-fashioned cocktail party this evening?  No inebriated loud games of beanbag toss, ratty cargo shorts, plumber's crack, ridiculously large stainless steel propane grills, rumbling 4x4s, women's sweatpants with the word 'PINK' splashed across the backside, tramp stamps, or ill-mannered children in sight.  Hey, a guy can dream of gentler times, right? 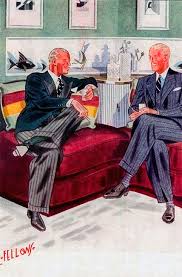 Another quiet Fellows illustration that is more in keeping with the sort of calm socializing we prefer here at Classic Style. . .  Although such occasions are few and far between in our corner of the world in 2017.  Many in the academic sphere seem to make a conscious and concerted effort to turn up their noses at polite convention.  Oh, the stories I could tell.  Others, even when highly intelligent and accomplished in their respective fields, sometimes come from backgrounds where polite social conventions were, largely, not a part of their upbringing if we are honest about it.  It always surprises me that more people don't pick up on these finer points, learning to walk the walk and talk the talk, so to speak, as they move into and through professional life.  Sadly, I suppose that is no longer a requirement.  The ongoing democratization of society is fine, in theory, but we have lost something along the way. 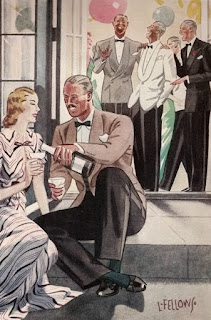 Of course, these stylized and idealized illustrations were meant to showcase new menswear items and styles when they first appeared in publications like Esquire and Apparel Arts decades ago, but they also hint at a more polished, refined, and largely bygone era.  I am well aware that the 1930s were not a pleasant time for many around the globe due to The Great Depression, The Dust Bowl, the gathering of war clouds on the horizon, and so forth.  Still, we could, without doubt, do with a bit of the gentility, as portrayed by these old pictures, in our own times. 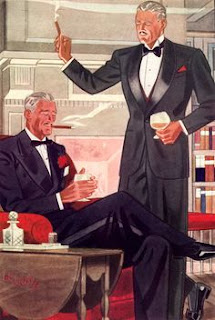 While cigars are not an essential part of the equation for me (although I would not turn up my nose at a genuine Cuban were one offered), there is nothing wrong with a nip of brandy and a quiet chat by the fire after the evening meal.  It strikes me as quite civilized. 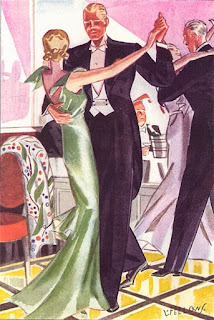 These various pictures by Laurence Fellows were produced during the 1930s, when touch dancing was the norm, and people like Fred Astaire and Ginger Rogers were part of the public consciousness thanks to their films.  Knowing how to dance, how to play an instrument like the piano, how to ride a horse (possibly), and how to conduct oneself in general, were considered part of good grooming. 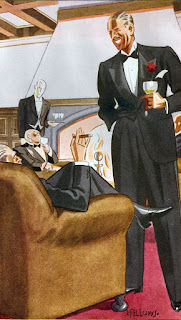 Why this bout of style nostalgia and trip down an idealized memory lane. . .  from an era thirty years before yours truly was born in the mid-1960s? 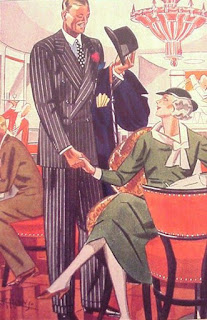 Day to day pleasant manners were simply a normal part of the scenery, at least in the more cultivated parts of society.  Heck, they still were as recently as the 1980s in many places. 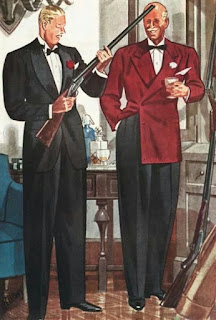 People could carry on a two-way conversation once upon a time rather than deliver endless, frantic monologues on autopilot.  It seems that there are more of the latter now anytime two or more people convene.  My suspicion has always been that this is a way for nervous, anxious, and socially uncomfortable individuals to control (they think) the direction a conversation takes.  Let's call it what it is. . . awkward. 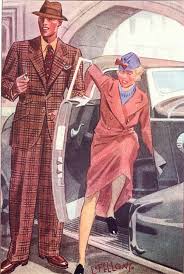 Gum cracking,  loud conversations audible at a distance, and other kinds of crass behavior (use your imagination) were not yet commonplace.  It's hard to imagine this pair loudly honking their noses into crumpled up paper napkins during a meal at the table.  People (more of them at least) practiced kindness, consideration for others, and knew how to respond to such niceties in kind. 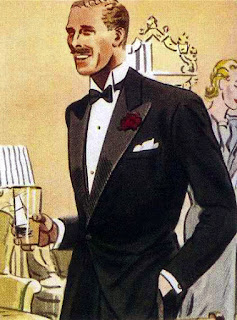 Whether he owned evening wear, or not a man -- some of them -- knew the importance of putting his best foot forward at all times.  In any case, you never wanted to come across as coarse and uncultured.  Yet again, this is something that was the case into my own lifetime during my formative years.  How far we have fallen and in such a relatively short time.  I am indeed out of step with the vast majority of society.  It almost seems as though boorishness is now worn as a badge of honor by many (most?) in the second decade of the 21st century.  When might the pendulum swing the other way I wonder?