Getting in the Christmas Spirit at Last! 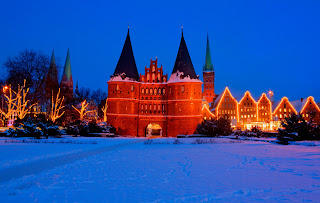 The Holstentor Gate on the way from the train station into the old city center of Lübeck, Germany, the one-time leading city of The Hanseatic League, a trade federation centered on the Baltic Sea and North Sea but with a reach tat extended well into Russia, Central and Eastern Europe, as well as Britain and the Low Countries.  Situated just a mile or two from the old internal border between the DDR and the communist GDR (you could almost see across the border from a high point), the city looked very much like this in January 1986 when I first visited.  I was instantly captivated and have loved the place ever since, visitingg again in 1990 and with my wife 2009.  In the winter of '86, there was still considerable coal smoke hanging in the air, and I even happened upon a young, tall blonde guy all dressed up in 19th century chimney sweep clothing with a top hat and smudges on his cheeks with all of his chimney-cleaning gear looped over a shoulder while walking along a quiet side street.  One of my biggest regrets is that I failed to ask if I could take his photograph. 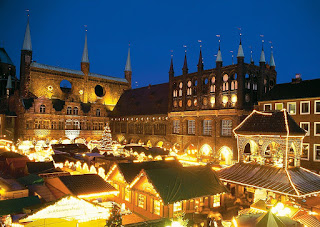 The main Christmas market in Lübeck nestled in between next door to the Marienkirche (St. Mary's Church) just visible in the left rear of the photograph  and the city Rathaus (city council) at center right with all of its cupulas.  Many years later, the Grand Duchess and I had a delicious lunch in the restaurant that now looks over the square where this 'Weihnachtsmarkt' sets up every December during the Advent period leading up to Christmas.

Well, things are slowing down here at Classic Style.  I've signed off of university email until after the first week of January, most of the gift shopping is done, the Christmas trees and house are decorated, and that wonderful winter quiet seems to have settled over everything a day or so before the season begins in earnest.  No snow yet, but I've got my fingers crossed, and the skis stand ready by the back door.  It's dark and chilly in any case, which is fine by me.

Otherwise, not much happening for the next few days until we journey all of five minutes around the corner and up the road to our neighborhood Episcopal church for the 5pm Christmas Eve service.  In the meantime, throughout the season proper, and into the new year, I'll share a few vintage seasonal illustrations, one of my many side interests.

Stay tuned, and wherever you are, I hope you have some time to put up your feet and relax with a drink of something warm, or warming (if you know what I mean), and those nearest and dearest to you.   Gifts, food, and sweet treats of various kinds are fine, but it's the visiting, chatting, and whiling away the hours together that is the best thing about the Christmas season in my view.  Although we're still a few days, allow me to wish you and yours the compliments of the season. 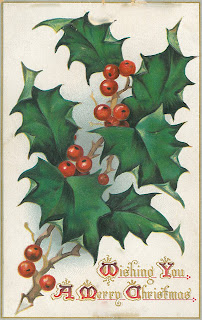 A Christmas card from 1910 according to accompanying online information.  Quiet, old understated greetings like these resonate more with me than much of what is churned out by greeting card companies today.  That either makes me an old soul, or a fuddy-duddy.  Probably both.