The Influence of Social Media? 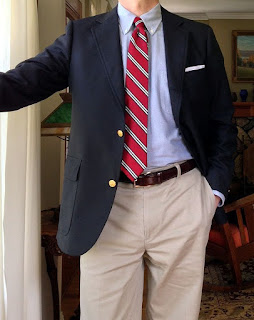 Not my photograph, but it illustrates pretty well my 'uniform,' if you will, especially in the warmer September and April weather during the academic year although I also rely on the occasional Madras necktie, linen, or seersucker suits.  What?  After September 1st?  I know, I know.  A gauche rube.  If the picture is yours, please let me know, sans the fusilade of obscenity now so typical, so I can provide attribution or remove it.


Recently, there was a thread over on the Saltwater New England blog discussing whether, or not social media and the internet has had any influence on how people shop for attire and/or dress themselves.

Speaking just for myself, I don't know that social media has had any influence on how I dress -- trad/ivy/prep call it what you will. . . much like my male family members of previous generations -- but it has made it easier to find a sartorial community of reasonably like-minded souls in our otherwise slovenly age.

I left Facebook a year ago, but the various blogs I still read have also clued me into some retailers of suitable gear that I might not have discovered otherwise.  So, social media, to some extent,  has also had an influence on where and how I make occasional purchases.  And that certainly beats making the trek to a shopping mall to brave the stench of popcorn and sales help who have no clue about their stock.