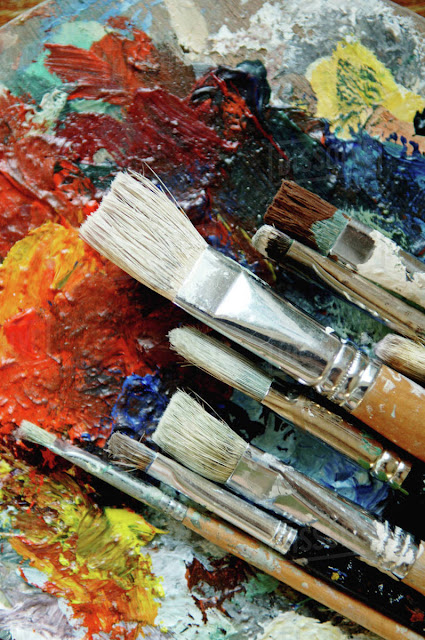 One of my many memories about my mother is her oil painting.  When I was four and five years old, I'd frequently sit on the floor near her easel while she worked, chatting about the day and taking in the decidedly pleasant aroma of the paints, linseed oil, and so forth.  Probably part of the reason why I enjoy using oils in my own hobby activities now and again.

Ol' Mom slipped away fairly quickly last week once my sister took her to the hospital last Tuesday evening although she was aware enough during the latter part of the week to converse with doctors and give definite answers to difficult questions.  She was transferred to a hospice in Pinehurst, North Carolina Saturday afternoon, just five minutes from her house there.  She died a short time later just after my sister arrived with a few of Mom's things from home.

None of this has been unexpected since Mom shared her diagnosis in July given the various cancers in her system and their advanced state.  Our mother told us over 20 years ago, in passing during an otherwise lighthearted conversation, to prepare ourselves for her eventual demise.

But the truth, I guess, is that we are never fully prepared or ready for the death of a parent or loved one even when we grasp it on one level.  And it's the strangest thing, but in the days since her death I keep expecting to receive a phone call, text, or email from her saying that it is all a false alarm, everything is fine, and not to worry.

Mom had an interesting life following her childhood in North Carolina, Florida, and Missouri.  A trained painter and sculptor, she lived in Britain for several years after meeting my step-father and remarrying, and for almost 20 years in Mexico -- where she caught and survived bouts with Dengue Fever and something the Mexicans call Chikungunya -- a place she visited and fell in love with when she and my father, just out of college, hitch-hiked around that country and Central America for about 18 months before I came along in late 1966.

In her 40s, once my sister and I were adults and living on our own, Mom fulfilled a childhood dream, traveling around the world and filling her passport completely with entry, exit, and visa stamps from the various countries visited during the trip.  It was completely full by the time she returned to the United States.  That particular journey included going way up the Amazon (without my step-father mind you) aboard a rather small steam-powered paddle boat in which she slept on a hammock, an honest-to-goodness safari in Kenya, time in South Africa, India, and Japan among others.  Not your garden variety Carnival cruise by any stretch.

There were also lengthy periods in Malaysia, Indonesia, Belarus, Russia, Kyrgystan. and Kazakhstan during several other trips in the 1990s when my step-father ran summer seminars on various aspects of international relations and crisis management for think tanks and government officials in those places in the immediate Post-Soviet years.  My wife, The Grand Duchess, once remarked that Mom reminded her of Auntie Mame.  Definitely more than a smidgen of Rosalind Russell and a dash of Lucille Ball to be sure.  Maybe a tiny bit of Isak Dinesen too, come to think of it.

Too young to be a beatnik, and a wee bit too responsible to indulge in all of the late 1960s and early 70s counter-culture excesses after my sister and I arrived, our mother always managed to provide a loving, stable environment for us with ample words of encouragement for almost anything we pursued as children, teenagers, and later as adults.  She played a prominent role as a room mother during our early school years without straying into what we now call helicopter parenting.  She also managed to back off progressively as we grew up, something a lot of parents fail to do now, realizing that we had our own lives and respecting those new boundaries.

As her own mother (my grandmother) once told me when I signed the lease for my very first apartment at 21, "You teach your children to walk, but when the time comes, you must also teach them to walk away."  And yet Mom was always there to pick up the pieces and lend a shoulder to cry on when everything collapsed as it sometimes does for late teenagers and young adults trying to find their sea legs.

While photography and the internet occupied her most in later years, Mom was a great reader and always suggested we have a look at something by this author, or that author.  "Give it the first 50 pages," she'd say.  Lawrence Durrell's Alexandria Quartet was a favorite set of novels that she came back to again and again.  She was also a great fan of Cold War-era giants like Ken Follett, Len Deighton, and John Le Carre as well as detective fiction written by the likes of Martha Grimes and Sara Paretsky among others.

Mom had a quiet, very wry sense of humor and irony.  A quick wit, she also appreciated the ridiculous and the absurd.  Those facets of her personality really came to the fore especially during the multitudinous games of Scrabble, Rummy, and Gin Rummy over the years.  These sessions always featured circuitous and riotously funny conversation and observations about life, which often included chat about the extended family and her own formative years.  Coffee was usually also part of the equation regardless of the time of day, or night.  I almost never managed to beat ol' Mom  as we sat across the table from one another, but I suspect that she might have let me win one of the last Scrabble matches we played when I visited her in North Carolina at the start of March this year.