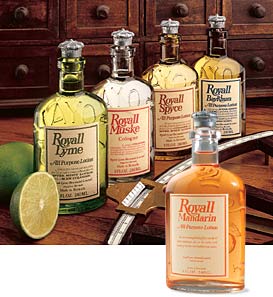 Not cheap, but certainly not as expensive as some, the various scents in the Royall line are one of the best kept secrets in the world of men's fragrances.  Not pictured are Royall Bay Rum and my new favorite, Royall Vitiver.

For average guys, kicking up our style a notch or two involves more than just clothes and shoes.  At some point, you'll want to think more seriously about things like aftershave and cologne.  Now, there are lots of these on the market at all price points from the horribly cheap to the frightfully expensive.  Moderation in most things, however, is a good route to travel, and that also holds true true when it comes to male fragrances.  Don't worry.  It's not necessary for you to load up on Axe body wash, spray, and aftershave (Ugh!), or dip into your savings account to afford a bottle of exclusive Aqua di Parma.

Very often, you can find nice, unique aftershaves and colognes in the US$25-60 range, and that's the case with today's feature.   Royall Bermuda Limited produces a collection of understated, masculine fragrances that are within easy reach of most pocket books.  Even better, these are a well-kept secret that many men don't seem to be aware of.  So, using one will be a truly unique addition to your style arsenal and help you stand out from the legions of Axe-wearers who plague our public spaces these days.

My maternal grandmother first presented me with a bottle of Royall Lyme one Christmas in the md-1980s, and I have been a fan ever since.  For our recent wedding anniversary, my wife gave me a new one to try, which I have fallen instantly in love with. . . Royall Vitiver, which has a spicy yet simultaneously clean aroma unlike anything I have ever experienced.  Thanks to the wonders of the Internet, it is much easier to track down and purchase items like these than once was the case not too many years ago.  So, if and when you are seeking a new fragrance, to help you kick up your own style a notch or two, give one of the Royall Bermuda Limited lotions shown above a try.  You won't be disappointed.

One final important note though.  When we have a scent that we really like -- and I sometimes stray close to this territory myself -- it's occasionally too easy to splash on a bit too much of your favorite aftershave or cologne.  And we've all been in an elevator with THAT guy, or behind him on the street.  Know what I mean?  Aftershave and cologne are things that only a spouse, partner, or lover should be able to smell when they are up close.  You don't want to apply so much of the stuff that people can small you across a room, and the aroma lingers in the air after you have left the building.  Less, is more here, Elvis, so resist the urge to drown yourself in that new Royall Musk you just bought.  Believe me.  Others will silently thank you for your consideration.