The Swing of the Sartorial Pendulum 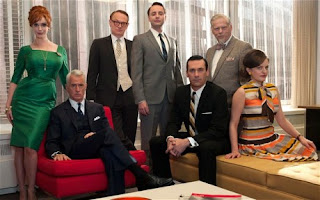 The cast of AMC's Mad Men.  While this particular business dress aesthetic might not be to your taste, do you really want to leave the house for work five days a week dressed like you're going to push a broom somewhere?

You might not need to dress in a three-piece suit and necktie within your particular line of work.  But neither do you want to drift aimlessly into the ill-defined, amorphous mess that "business casual" has become most places.  Why risk straying dangerously into slob territory?

Like it, or not, a slovenly appearance, implies a boatload of negative things to clients, co-workers, supervisors, and even strangers you pass on the street.  You don't care about details.  You can't be bothered.  It's too much trouble.  You're too busy.  It doesn't matter.  Others just have to deal with it.  You'll wear and do what you want.  You're not putting yourself out for anyone or anything.  Tough luck, buddy!  The list goes on and on.

Sorry guys.  Hate to break it to you, but that kind of self-centered attitude no longer carries any weight in the professional world, or, indeed, within what used to be called polite society.  Especially in tough economic times when competition for scarce jobs and promotions is fierce.  It ain't the 1990s anymore before the tech bubble burst.  It's just not smart leaving the house for work in 2013 dressed in saggy jeans, dirty khakis, and ill-fitting fleeces or zip-up sweat jackets.  Items you might wear to rake leaves or clean the garage on a Saturday afternoon.

Sadly, many of the male employees I observed early this morning, from the courtesy van of my local auto repair shop, schlepped aimlessly into the corporate headquarters of a nationally recognized insurance giant wearing precisely the items I describe.  CORPORATE HEADQUARTERS!!??  Office jobs.  You would have thought from their appearance, though, that most of these guys were headed to punch the clock on the way to operate heavy manufacturing equipment during their shift.  If you aspire to more than simply the bare minimum in life and career, however, a little thought and effort concerning your appearance and what it conveys is vital. 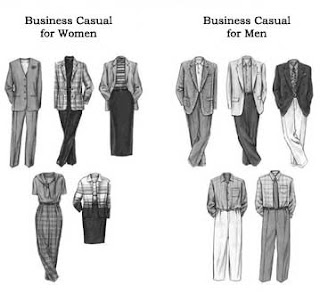 Some easy suggestions for more fitting business casual attire for men (and the ladies too).


So, set yourself apart from the drones in the cubicles around you just a bit.  Take a little time to spruce up your wardrobe.  Make an effort to look like you give a damn and are up to any professional challenges or opportunities to lead that might come your way.  Keep an eye open for sales (Land's End, L.L. Bean, or J. Crew for example), or hit the thrift shops and acquire a few good quality sports jackets, a navy blazer or two, several pairs of medium weight wool dress pants in grays, charcoals, and taupes with maybe a navy or charcoal suit for special meetings or social occasions.

Endeavor to own more than a single necktie with Pepe LePeu on it.  Visit your tailor for minor alterations to make sure everything fits you well.  Ditch the sneakers and square-toed vinyl shoes for a few pairs of lace-up leather shoes, along with some classic loafers in oxblood for those less formal days.  Don't forget to match your belts to your shoes either.  Demonstrate to the world that you have some broader knowledge and sophistication beyond the book learning of your college years.  You are an adult member of the white collar world now, presumably something you wanted since you took the time to earn at least one degree, so make the effort to look like a professional with some expertise and grooming.

Along those same lines, make sure your physical appearance is impeccable.  Don't worry.  No one is asking you to become a vain pretty boy, but get your hair trimmed a bit more often.  Opt for a conservative, masculine cut and leave the mousse to the junior high boys.  Comb and part your hair post-shower.  Shave five mornings a week.  Avoid dousing yourself in cheap aftershave or cologne.  Exercise some restraint.  Keep an eye on the eyebrows, nose, and ear hair too, and trim when needed.  Check your appearance in the men's room mirror occasionally during the day. 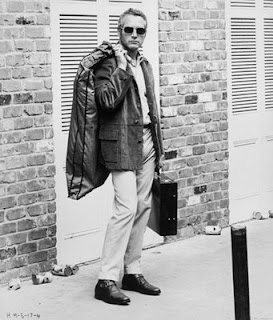 A casual, but nonetheless extremely sharp Paul Newman,  Notice.  Leather shoes.  No tie.  Informal jacket.  Yet he still looks great.  This is how to do it.


Here's an equally important related, though often overlooked, point to remember.  There are about a thousand different ways of expressing your thoughts, whatever those might be, without peppering your professional and casual conversation with four-letter words every two seconds.  So, watch your mouth too.  Sure, the very occasional clever (is there such a thing?) dirty joke might be one thing when you're with the guys. . .  away from the workplace.  But constant swearing doesn't make you appear edgy or cool.  Just ignorant.  Without much to say that's of any consequence at all.  And that's on a good day.  Get into the habit of looking and acting like you are someone special, a cut above the herd, who is worth having on the team and knowing personally.  Even on your own time away from work.

Done the right way, your clothing (and behavior) can accomplish a lot for you, both professionally and socially.  As noted writer and dresser Gay Talese stated in a 2011 Wall Street Journal article on the now discernible shift away from ultra (re: slob) casual attire toward more formal clothing once again, "Dressing conscientiously is exalting in the act of being alive. . .  It's an act of celebration [signaling] that you're here." 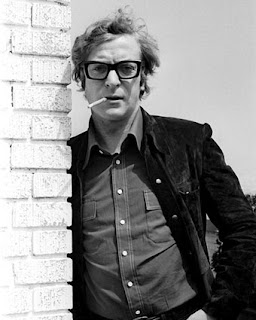 A much younger Michael Caine, looking casual, yet sharp, and ready for anything with nary a suit, tie, or backwards baseball cap in sight.


So, remember guys.  How we dress and act -- at work and in our private lives -- speaks volumes about the kind of people we are.  Regardless of what we might pretend to ourselves, or proclaim loudly to others.  While Mom and Dad might not be there to remind us anymore, let's strive to put our best foot forward in every situation.  Always.