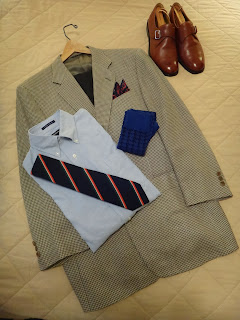 This combination of garments was worn last Friday when I aimed for a Luciano Barbera vibe.

Friday's and Monday's ensembles met with that rarest of animals. . . wifely approval!   My poor other half grew up with male family members who rarely wore sports jackets and odd trousers, to say nothing of suits, neckties, and good shoes. . .  even when such things were still fairly typical back in the 1960s, 70s, and 80s.  So, it remains exceedingly difficult to get her enthused about classic male style, to say nothing of a little sartorial individuality.  However, yours truly managed to win that coveted spousal approval recently on not one but two days, which is one for the record books if you ask me.

The first photograph above includes a Canali wool sports jacket, charcoal worsted wool pleated pants by Zanelli, a no-name wool necktie made in the U.S.A., and some Land's End monk strap loafers.  The shoes, which were purchased new back in the fall of '07, are much higher quality than most of the footwear sold by the company.  Among other things, they feature welted construction on the leather soles, leather linings, and even cork footbeds, making them extremely comfortable.  Every bit as comfy as my Allen Edmonds.  The pants, tie, and pocket square, on the contrary, were thrifted for only a few dollars U.S., and the jacket was purchased second hand from Giuseppe at An Affordable Wardrobe a couple of years ago. 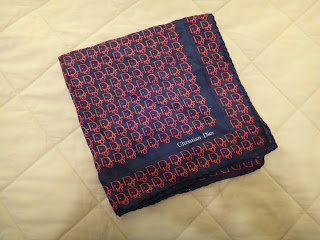 Here's a close-up of the Italian silk, hand-rolled pockets square that was part of the ensemble above.  Not black but a very dark blue if you examine the square under direct light.  My wife really likes this one, something that isn't true of many of the other pocket squares that reside in the large glass jar on my dresser.


Today's combination of clothing, shown below, includes an amazing Ralph Lauren double-breasted jacket in wool flannel, which again came from An Affordable Wardrobe.  Dig those peaked lapels!  Other items included charcoal wool flannel pants by Corbin, an Italian wool tie by Rooster, and a pair of Allen Edmonds wingtips, which have shown up on The Average Guy's Guide to Classic Style before.  The pants, tie, and pocket square were all picked up at different times at one of two area thrift stores near me that routinely have good stuff. 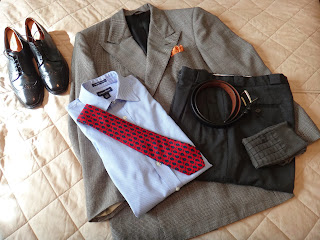 Monday's flannel ensemble, which had a much more 1930s-ish feel to it, sadly without a good fedora though.


One problem I run into with thrifting menswear, however, is that I'm still reasonably trim even though I am well into my 40s.  I wear a 39R or 40R jacket, along with a 15"x33" shirt, and have a 32" or 33" waist, depending on the time of year.  This makes finding things that aren't huge on my frame at times kind of difficult.  For instance, I often come across lots of great Brooks Brothers shirts on the thrift store racks, but invariably their dimensions always seem be something in the neighborhood of 18"x36".  Or I find lots of great Harris Tweed jackets, but they are sized 46L.  It's maddening!

Of course, you can and should have things altered before wearing them, so that they fit you rather than the previous owner.  It's always best, though, to minimize what the tailor or seamstress will need to do to an item of clothing by looking for things that fit you pretty well to begin with.  Beyond an inch or two either way, depending on what it is, altering things too much risks throwing off proportions, pocket locations, and buttoning points, leaving you with garments that don't quite look or fit right.  Still, I've managed to find some amazing pieces over the last couple of years, expanding and improving my wardrobe ten-fold while at the same time selling off or donating older, lesser quality items as they are replaced with better things. 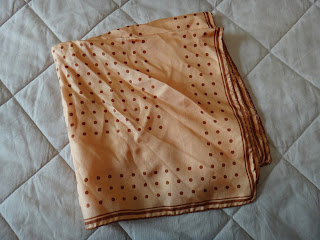 And here is another close-up of today's Italian silk pocket square, by Ashear, to which my other half also gave two thumbs up.  Not something that occurs very often here.

The point behind all of this silly fan-boy blather is simply to demonstrate that with a little time and patience, an average guy, who might not be rolling in dough, can nevertheless assemble a killer wardrobe without selling his soul to the devil, or auctioning his firstborn into indentured servitude.  What's more, thrifting enables you to assemble a totally unique wardrobe that is also rich in sartorial personality.  And in our current age of overly casual conformity in so many areas of life -- otherwise known as just plain old sloppy -- that's not a bad thing.  It's surprising the kinds and quality of classic menswear you can scare up if you just open your eyes.