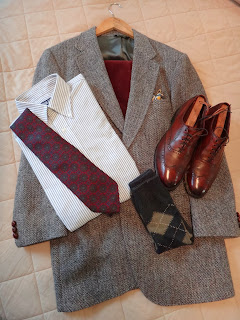 Yesterday's clothing combo sans belt, which I forgot to include in the arrangement before I photographed it.

Fall is finally in full swing here, and today has been a delightfully chilly mid-October Friday with slate-gray skies and a crisp 48 degrees Fahrenheit (8.8 Celsius) temperature for a high.  Just the kind of weather we need for some more interesting sorts of seasonal attire like the kind shown above, which I wore yesterday (Thursday), the last day of classes for this week since this 4-day weekend is Fall Break Weekend  and commences today.  It's nice work if you can get it.  The ensemble shown above consisted of the following items:


The female unit, a.k.a. Mom, has been away at a conference for a few days during the latter half of this week, so it has been the Young Master and me at home and school since Wednesday, or "just the boys," as he keeps mentioning.  Today has been a busy, fun-filled Friday for the both of us.  Following a quick breakfast, I dressed him in his favorite rugby shirt, tan corduroys, argyle socks, and a pair a small leather deck shoes ("top siders" or "dock siders" as they are known in much of the United States), and then it was off to the veterinarian's office with both cats for their annual check-up and inoculations.   We followed with a mid-morning visit to one of our local cafes, where we enjoyed a latte (Dad), some milk (the Young Master), and two pieces of heavily frosted spiced pumpkin bread.

Later, the Young Master and I dropped the cats at home and walked down the street to a small park that we like to visit.  By this time, it was after Noon, but since it was chilly and school was in session for older children in town, we had the park to ourselves.  Which suited both of us.  After an hour of mutual kicking of fallen leaves, examining tree bark, and running as fast as he could into my waiting arms only then to be lifted high into the air and tickled for a moment before starting the process all over again, the Young Master and I walked further down the street to a neighbor's house to see "Maggie."

As luck would have it, Maggie (an extremely friendly Golden Retriever) was outside in her yard, so we spent several minutes petting her and throwing one of her toys back and forth for her to chase and bring back to us.  Much licking of hands (Maggie) and laughter (the Young Master) ensued for 15 minutes or so.  Lunch came later once we returned home, and then the Young Master and cats retired to his room on the second floor, where he used his large wooden building blocks to replicate downtown Manhattan until quiet time began at a little after 3pm.  We topped off the day with waffles and fruit for supper on TV trays at the foot of Mom and Dad's bed along with two episodes of Sesame Street online via Netflicks on a spare laptop PC before bedtime.  Contented sigh.  It has been one of those all too rare days where everything progresses just like it should and exactly like one envisions and hopes it will. 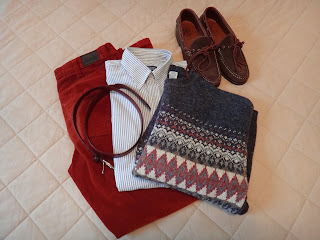 Today's ultra casual Fall Break Friday selection of items before I put them on this morning.  My wife still gives me grief about these corduroy jeans, which are, admittedly, pretty orange.


So, what in the world did yours truly have on for this casual and chilly Friday at home and out and about with the boy?  Glad you asked.  The uniform shown just above consisted of these items:


What?  No suit?  No tie?  No sports jacket with an odd pair of dress pants?  Heinz-Ulrich, you're slipping.  Yep.  Sometimes, kicking one's everyday style up a few notches simply means throwing together a few well worn, very casual, yet nevertheless comfortable items and rolling with it.  What don't you see?  That's right.  No stretched out sweatpants or hooded sweatshirt, no over-sized sneakers, frayed cargo shorts/pants, or backwards baseball cap, and salsa, sweat, and/or beer-stained t-shirt (with some stupid logo or saying on it) anywhere in sight.  Perish the thought.

That's right.  It's entirely possible for a father and small son to dress casually, neatly, and appropriately for the season and a laid back day together without looking like trashy slobs.  I'd even suggest that if more parents made it a habit of dressing their children just a wee bit better than has become the norm from what I notice in public -- and no, it doesn't require loads of cash either, so let's not reduce the issue to an argument of simple economics; it has many causes -- that the problem of terminal pigness on the part of so many would solve itself in a generation or two because the little darlings would be acclimatized to dressing, looking, and maybe even behaving somewhat better than has become the accepted norm across and throughout so much of society.

But wait!  Isn't molding and shaping the development of children in a favorable direction, through instilling values like discipline, self-respect, consideration for others, and pride in one's appearance, what parents used to do?