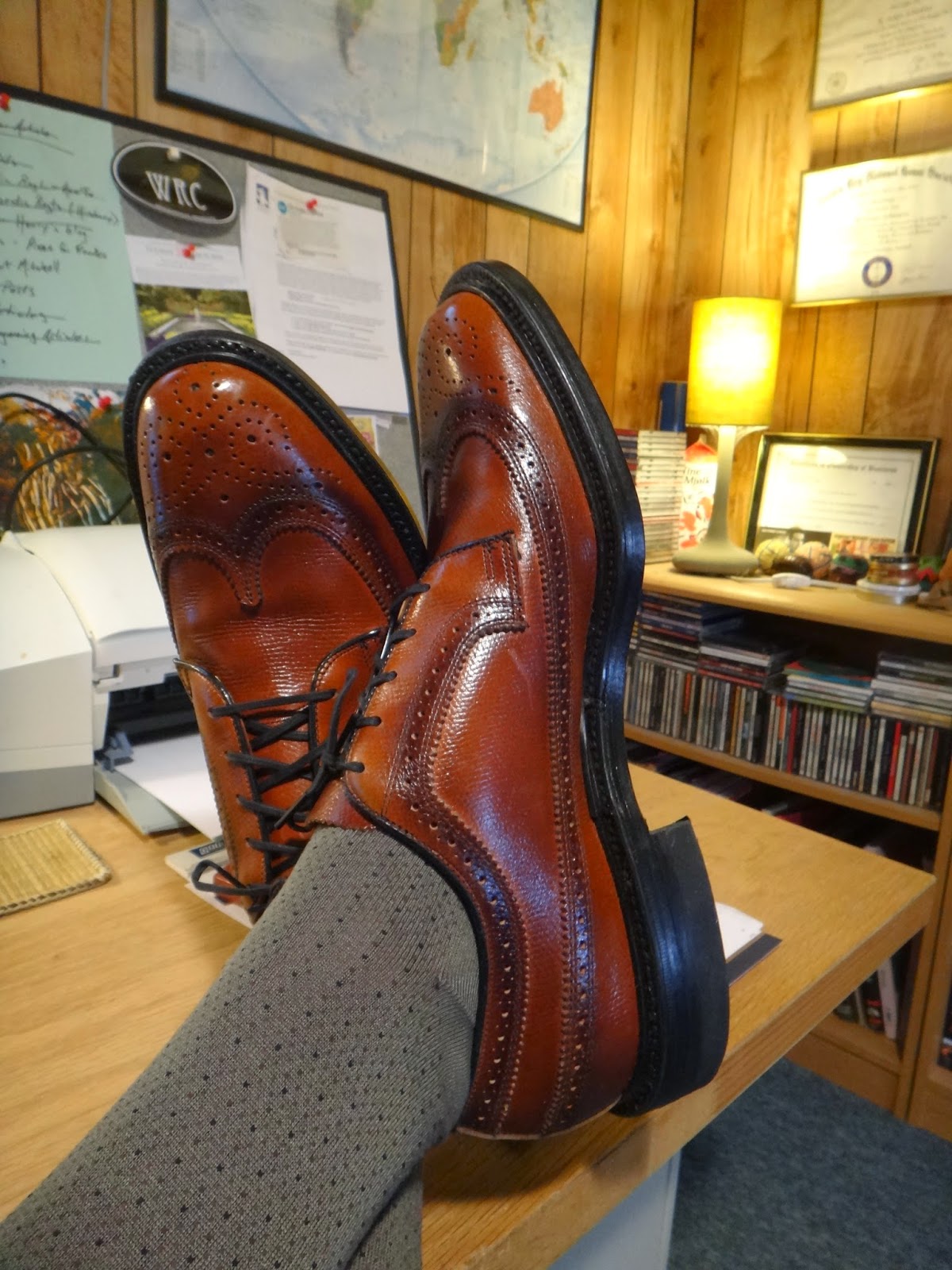 Brand spanking new with original tags, apparently never worn before, all leather, US-made J.C. Penney full brogue wingtips with Goodyear welt construction.  Maybe not US$2000 hand-made shoes, but at less than US$10, I'm not complaining.  The uppers are delightfully supple and the aroma of new leather and its related squeakiness is music to my ears.  Yes, I'm clearly a shoe nerd.  I see that now.

Whether you assemble a classic wardrobe through careful thrifting, the occasional E-bay purchase, or you've got enough spare cash for new items at retail prices, it pays to keep your eyes open.  Always.  For instance, I found the tan wingtips above at my best local thrift/charity outlet earlier this afternoon after weeks of seeing nothing there.  Absolutely nothing.

And then. . .  Boom!  I walked into the shop on a whim today, turned the corner toward the shelves where shoes are displayed, and there they were.  Just my size, a US 9.5A.  Truthfully, I can also wear a 9D and an 8.5E, depending on the brand and style of shoe.  Anyway, the pair above is slightly snug across the vamp at ball of my foot, but not uncomfortably so, and a few weeks of breaking them in should render that minor issue null and void.  They fit like my favorite pair of Dan Post cowboy boots when they were new.  Incidentally, those are also tan.

The pair of shoes below were a find at the same shop a week ago for less than US$5.  L.L. Bean kiltie loafers in US9.5C.  They may be newer, cheaper corrected grain leather, although the creasing and wear to the finish looks pretty good all things considered.  Nowhere near as bad as long-term wear I have experienced with discarded pairs of Bostonian tassled loafers for example, where the shoes simply fell apart at the vamps once the plastic finish cracked.  Not good.  In any event, these loafers should serve very nicely as rainy day shoes in the fall and maybe also when I toss on a blazer and khakis for an occasional dinner out with my wife (sans the Young Master) once college classes and cooler weather resume in the late summer and early autumn.

It seems, though, that I need two new pairs of cedar shoe trees now.  What a problem to have. 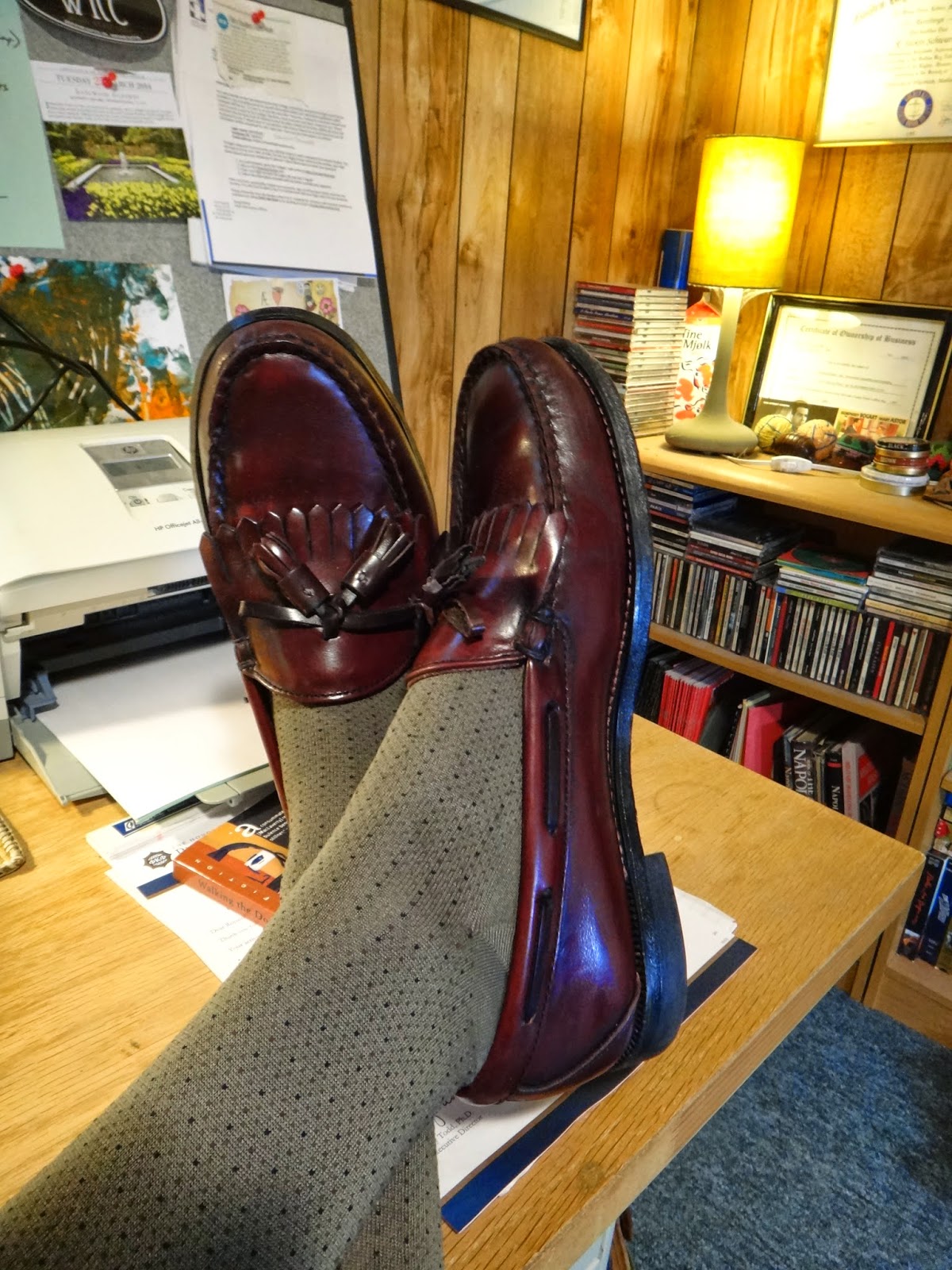 Worn, comfortably broken in L.L. Bean kiltie tasseled loafers also with Goodyear welt construction.  They might be corrected grain, but they will serve very well for those less clement days this fall and next spring, and they are a step up from my very plasticy Johnston & Murphy rainy day loafers.  A bit dressier too, which is fine by me.

Guys, unless you want to resemble a gang banger wannabe, or you honestly weigh 500 pounds and can't hold your legs together, stop that strange duck waddle and WALK.  Put one foot in front of the other, alternating with your right and left foot, and develop a purposeful stride forward.  You don't have to power-walk at a rapid pace necessarily, but stop with the aimless shamble, swaying your upper body side to side from the waist.

If no one ever told you before, you look really stupid when you do this.  It's not 1974, and you're not The Fonz.  You aren't an überbutch lesbian with a huge chip on her shoulder either.  And neither are you Snoop Dog, Tupac Shakur, or any other hip-hop artist, dead or alive, mugging and posturing for your homies, hoes, and fans in a music video. . .  or on a street corner.  Stop acting like it.

It's not clear why so many guys of various ages and backgrounds waddle around like this, but it does seem to be a peculiar American trait.  It's something that has jumped out at me in various other places around the globe whenever I've spotted (usually after hearing them first) a group of Americans traveling together.  It's hard to miss.  And the "man waddle" is rampant at home within the U.S. too.  Why?  Can anyone tell me?  Surely, not everyone aspires to look and move like street gang thugs or the background extras on Yo, MTV Raps during the early 90s.  Or am I mistaken?  Maybe it's just a matter of pulling up your pants, assuming they aren't five sizes to large, and wearing a belt.