Exercise Caution and Restraint with Fragrance. . . 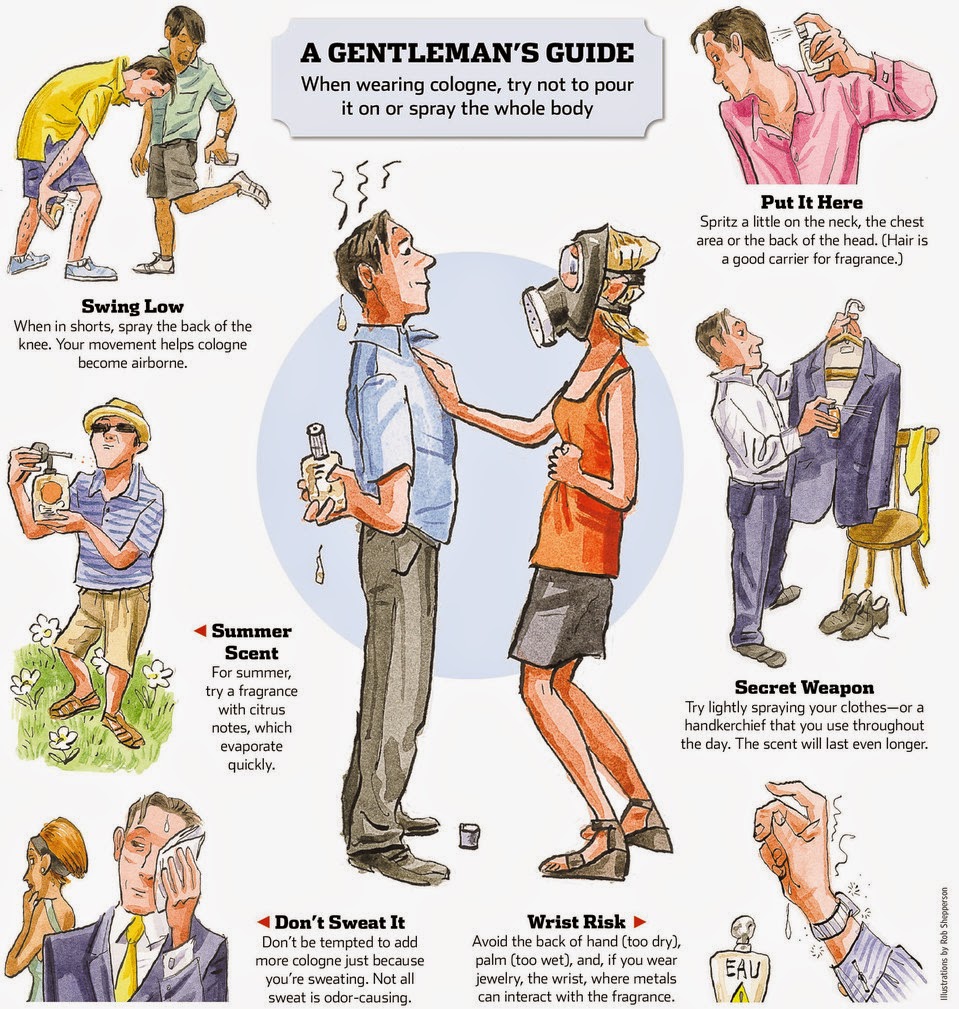 A visual guide, which accompanied the recent Wall Street Journal article on the subject of men's fragrance and wearing too much of it.


My wife and I recently celebrated our eigth anniversary by visiting a new Italian place in town that, mercifully, is not part of a certain national chain.  You know, the one where they play seating games and make you wait although reservations aren't necessary, and the dinner plates are the size of platters?  Where the atmosphere is always kind of like post-high school prom meals in the middle of the night with behavior to match from your fellow diners?  Yeah, that one.

Neither was our restaurant of choice the other night similar to the other Italian restaurant in town that many of our friends and acquaintances rave about, but which is equally chain-like, generic and, worse, LOUD.  Definitely not a pleasant atmosphere in which to dine.  That's not even mentioning one's fellow patrons sitting just a few feet away in their t-shirts, wife-beaters, flip-flops, and baseball caps with their elbows on the table and their faces down in their troughs. . .  er, plates.

Anyway, our meal last Saturday evening was decent enough, but I could not help but notice throughout our two hours or so at the table that periodically we were treated to the delightful aroma(s) of:

a) Male B.O.
b) Flatulence (I know, I know.  We should have left after the second occurence.), or
c) Strong and cheap men's cologne and/or aftershave of one brand or another as people entered and exited the restaurant.  And we were a good 35' from the door.


Then, lo and behold, I ran across this June 30, 2014 article from The Wallstreet Journal on men and fragrances which began like this:

"When it comes to men's cologne, it seems to be all or nothing. Many men wear none—and many men wear too much.

The results can be overpowering. The problem gets worse in the summer, when some men—particularly young men raised on all-over body sprays such as Axe—feel the need to mask sweaty body odor by spritzing on a little extra fragrance."

Read the rest of the article by clicking HERE.

Yes.  I know.  I've said something similar here at The Average Guy's Guide to Classic Style before, several times.  It's like a broken record, but I'll sound the call yet again because it's so very necessary in 2014.  Guys, if you want to kick up your everyday style several notches, you need to remain mindful of four things:

1) Shower or bathe, for the love of God, before dinner or going out on the town, and put on fresh clothing if you've done anything strenuous during the day.  Yes, even if you showered that morning already.  And apply deodorant before dressing.  Ok?

3) Put on some decent clothes and shoes if you are going anywhere other than the local Dairy Queen or beachfront food stand.  You're not on the way to the garage to work on your '71 Nova S.S. or '69 Chevelle.  Now, that doesn't necessarily mean you need a suit, or even a blazer and critter pants, but for the love of Pete, cover your feet, upper arms and hairy armpits with an actual shirt that has actual buttons down the front.  Not a t-shirt.  It's disgusting when people are trying to enjoy meal in public while your matted underarm hair and man nipples play peekaboo three feet away as the main course is served.  Ugh!

And finally, take off those damn ballcaps when you sit down to the table!  This seems to have reached almost epidemic levels across Middle America, and I simply don't understand it.  How hard is it to take of that filthy John Deere or Chicago Whitesox cap?  I'm starting to think that it is not that we have fallen so far as a society in such a short time with regard to such frivolous and basic social niceties like table manners, but rather that lots of people never had them to begin with.  Sigh.

4) Control your body, guys.  You know what I'm talking about.  And no.  It's not OK just to let it out in public spaces.  Visit the restroom if necessary, and take care of the problem there.  Don't be a p-i-g pig around others!