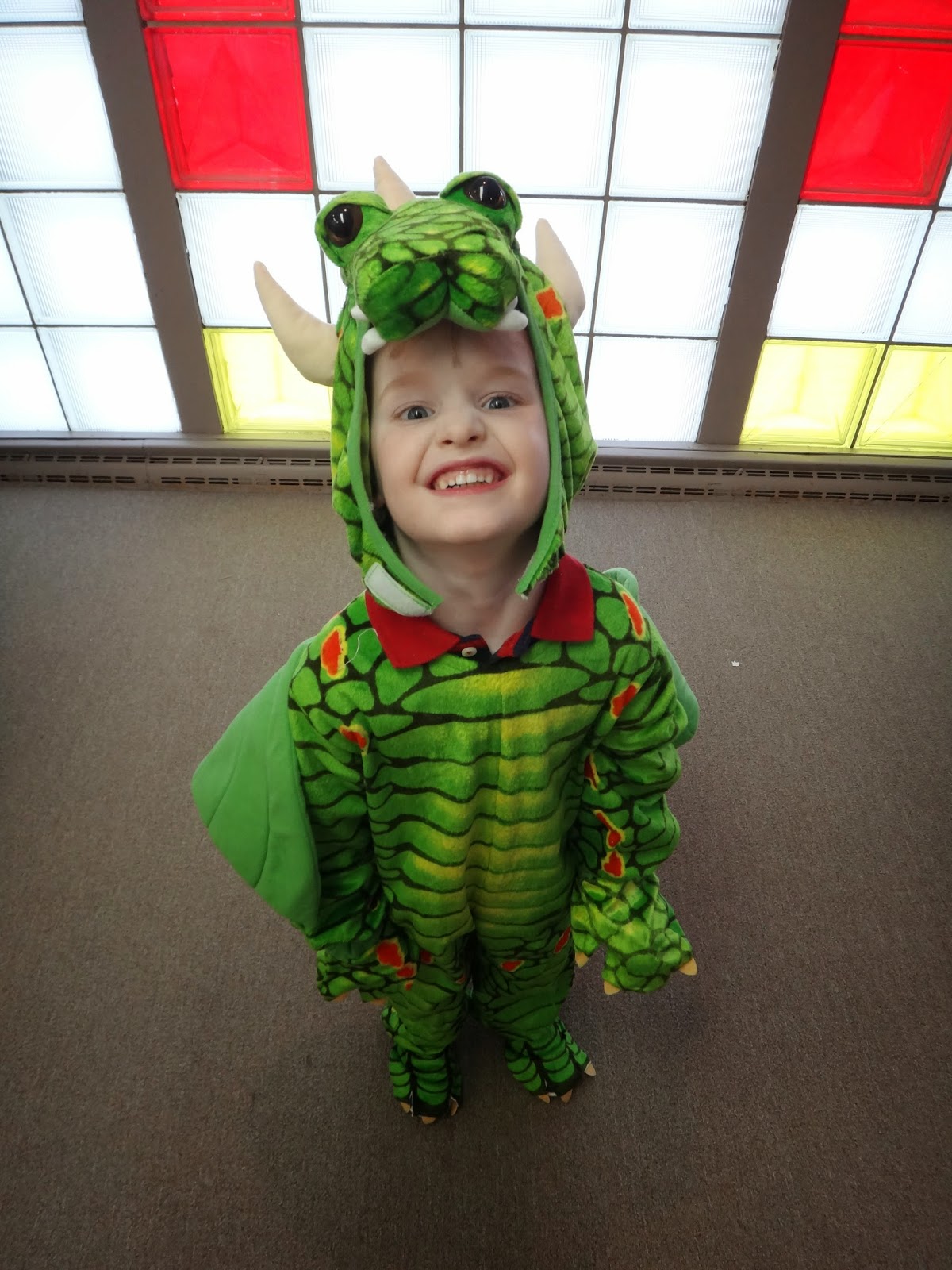 We had a dragon visit the von Boffke household during Halloween 2014 (von Boffke jr.), and a most stylish dragon he was too.

Halloween 2014 has come and gone, and it seems like it was a reasonably successful one.  The occasion is an enjoyable one for younger children, and they were certainly out in force during our designated trick-or-treat times yesterday evening.

This year, we set up a self-serve arrangement on our front steps, so that yours truly could accompany the Grand Duchess and the Young Master around the neighborhood.  It was quite chilly though, so we visited about 10 houses before the Young Master announced that he was ready to head home.  It was just the right amount of time, an hour or so, on a crisp, October evening with a pretty, pink sunset on the horizon.

Back at home, we even managed to go through all of our candy by the end time designated by the city, fortunately, so no snacking on leftovers for ol' Dad this weekend. Simply by cutting out lunch, limiting breakfast to 24 biscuits of Kellogg's Frosted Miniwheats, and keeping supper portions small with few second helpings, I've managed to shed five pounds in the last four weeks without too much effort or hardship.  Ten to go before I hit my target.

But back to Halloween.  And I fully realize that the following makes me seem like an awful, dusty, crusty, old fuddy-duddy, but so be it.  Here are a few observations after yesterday evening's foray with the Young Master:

1) While it's not exactly my thing, it is fun to see some parents get into the spirit of the occasion and don a witch's hat, or something similar, to accompany their children around the neighborhood.  But, please remind your kids to say "Thank you" at the conclusion of the trick-or-treat transaction.  To be fair, we did hear these magic words from some groups of children with whom we mixed yesterday evening during our own dragon's Halloween jaunt around the neighborhood, but the practice of "Thank you" wasn't exactly universal from the mouths of many of these babes either.

2) Halloween is for younger children everyone.  Junior high and high school kids, and/or college-aged adults (teenagers to early 20-somethings) are far too old to be trick-or-treating for free handouts.  Grow up!  Some parents out there need to do a better job of suggesting that as certain milestones come and go in a young person's life.

3) What is the deal with all of the clearly middle class kids clearly dressed as the 21st century version of marauding street thugs -- right down to hooded sweatshirts and/or knit ski caps -- complete with plastic whiffle ball bats and backpacks to hide the loot?  What in the hell are their parents thinking?!  In which universe is this a "cool" costume for your child, much less permissible?  And don't give me the weak argument that it's the most/best these kids can come up with.  Bull.

4) Can someone please explain to me the apparent mindset that handouts, regardless of whatever those might be, are somehow a God-given right, and you should, therefore, scoop up as much of whatever is being doled out as you possibly can?  What is that all about?  Each year at Halloween, we notice carloads of children (and their parents), who we never see around our ethnically and economically mixed neighborhood. . .  except at Halloween, when the "children" (often young teenagers already a little old for trick-or-treat) are dropped off from shiny, fairly new late model vehicles by their parents to sweep the streets for whatever they might be able to get before piling back into the car to hit a different neighborhood in another section of town.  This way of thinking -- having one's figurative or literal hand perpetually out for freebies -- is unconscionable.  Is that really the kind attitude and behavior we ought to instill in our children?

Ok.  Saturday morning rant over.  Bring on the American Thanksgiving holiday, a nice one that, unfortunately, gets lost in the manic run up to Christmas.