Here's one of the Young Master mid-parade.  He concentrated hard to remain focused and with his class as they visited just about every other classroom around the school, ignoring Mom and Dad in the process.

Today was Letter Day at our son's school, and the kindergarten classes that will conclude in about four weeks held a parade in which each child had the chance to share his, or her special letter project with the rest of the school.  The Young Master and I worked together to create his sandwich board on Sunday afternoon and early that same evening.  Not too shabby if you ask me. 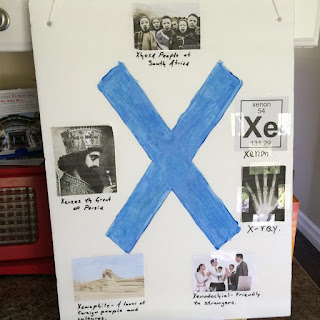 Here is the front of his sandwich board that YMP and I made, painted, and labelled on Sunday earlier this week. 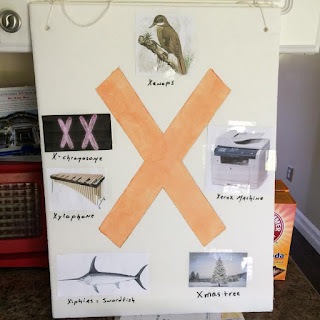 Here is the rear.  According to his teacher, YMP was able to tell her all of the words on his board, which was a nice surprise since I wasn't always sure that he was listening when we went over all of this a few times late yesterday (Tuesday) afternoon.  YMP was more interested in his Legos and plastic dinosaurs by that point in the day.

And Cropped Dad (Off with his head!) after returning home post-Letter Day Parade before changing into khaki shorts, a rugby top, and my trusty ol' Sperry topsiders.