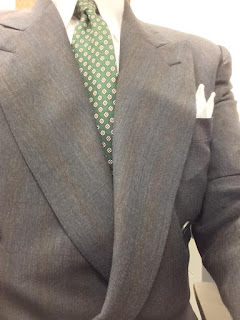 The upper half of a Belvest 6x2 double-breasted suit that I scored for a song on Ebay late last spring during its inaugural wearing last Tuesday.  The waist and seat need to be let out a wee bit more, but otherwise, a very comfortable, nicely fitting suit.  My students that day didn't quite know what to make of it I am sure.  One did ask how many suits I had, and my reply stunned her.  Somewhere in the neighborhood of 12-15, including a few that still need alterations at some point before they can be worn.  I know, I know. . . 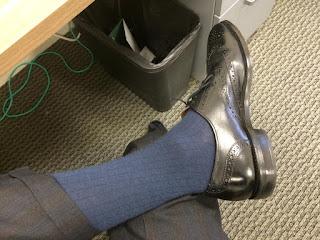 And the lower half of same suit.  I thought it best to everything very plain and forego brighter statement socks.  The double-breasted suit makes enough of a statement itself in 2016.

Swamped with work and teaching stuff these last few weeks, but I've managed to take a few photographs here and there of the more successful combinations of attire, which I'll share here.

I finally got around to ordering a pair of Classic Galoshes from the folks at Swims a few days ago.  I had no idea that the company was based in Norway (my old stomping grounds during several visits and periods of study in the 199s) of all places, so of course I opted for the color red, which is the predominating color of the Norwegian flag.  These should be here by midweek, a good thing since we've had some amazingly wet, rainy periods so far this fall in Mid-Michigan although I'm not quite ready to set aside my dress shoes for Bean Boots.  That will happen once the snow accumulates this winter.  Until then, I'll burn out people's corneas on those dark, dreary, wet days to come with the red Swims!

Finally, I mentioned something a few weeks ago about sharing some howling style (or complete lack thereof) mistakes of my own right here as a cautionary tale of sorts.  Sadly (or maybe not?), the photographic evidence seems to have disappeared from my I-phone in the meantime.  Whew!

Let me just advise that if a man is going to wear a pair of spectator shoes, even fairly sedate ones,  then the socks and everything else should be kept very, very plain.  I had one of those awful, self-conscious "What was I thinking??!!" moments during one of our last very warm days here three or four weeks ago, when I wore these two items together.  The results were anything but admirable.  Or attractive.

I later noticed a young man, with his wife and newborn baby while waiting in the pediatrician's office, making the same mistake a week ago.  Shudder!  "No, no, noooooo!!!" I screamed inside, but then he had at least made an effort to dress for work and a visit to the doctor, and he certainly look more pulled together than has become that sad, pathetic average.  So, I cannot criticize him too strongly for making the same mistake as yours truly.

Suffice to say that it's perhaps a good practice to  limit flashier items to just one per clothing combination, or risk straying into unwitting clown territory.  It's too late for me, I know, but there is till time to save yourselves. 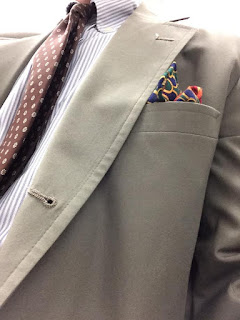 Here is a combination of items from a couple of weeks ago that I was reasonably well pleased with. 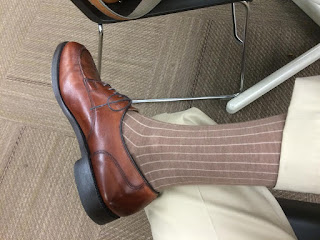 And the lower half, featuring a new pair of coffee colored Merino wool socks from Dapper Classics who have become my go-to sock supplier of choice during the last few years. 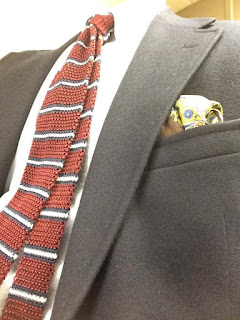 And finally, one of my heavier wool flannel single-breasted navy blazers work on a chilly but sunny day recently with a knit silk tie from Land's End and light blue oxford cloth button-down shirt. 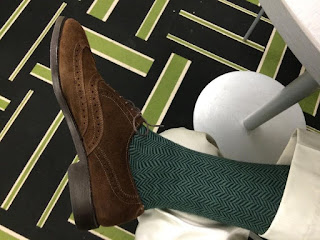 And on the lower half that day a recently recrafted pair of Allen Edmonds sued shortwings along with another pair of Merino wool socks from Dapper Classics.