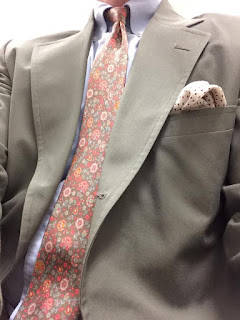 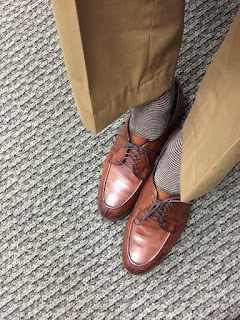 The combination of items for Thursday this week -- photographed as I sat in my office waiting for a student who never showed up -- featured a recently recrafted pair of Allen Edmonds split-toe oxfords and a had-made Italian necktie that I picked up a couple of years ago in my old stomping grounds of Central Illinois for around US$1.00.  I suppose the flowers would probably frighten a lot of guys away from even thinking about wearing it, but it seemed like the perfect Autumn tie for a cool, mostly cloudy October day.

Making an effort to dress better than the average is always a learning experience.  Something I realized earlier this afternoon during a quick visit to my tailor to drop off a few recently acquired pieces for the usual routine alterations.  When it comes to dress pants' inseams, I humbly suggest we opt for a medium break.  This leaves enough length to cover your socks and the tops of your shoes without looking Pee Wee Herman weird.  At the same time, there is not so much material left flapping and puddling around your ankles that it looks like you've got your father's pants on.

No doubt, you'll come across other, conflicting views and advice out there in the men's style blogosphere, but a medium break seems like a reasonable compromise between the two extremes of currently trendy on the one hand and traditionally stodgy (and veering toward sloppy) on the other.  Just my two cents on the matter.

Otherwise the visit to the tailor today was to have a couple of wool flannel Polo Ralph Lauren suits altered slightly (inseams and sleeve lengths) along with a pair of very pretty (and subtle) dark red, navy, and hunter green wool flannel pants by Bill's Khaki's that I purchased about a year ago to wear with a navy blazer  during the Thanksgiving and Christmas holidays.  Naturally, I never managed to get the latter to the tailor in time given all of the hoopla around finally selling our old house in Illinois in late November 2015, closing on our new house here in Michigan in early December, and moving into it eleven days before Christmas.  Jeeze Louise!  It was not an experience I ever care to repeat.  In any case, the pants will be all ready well in advance of the holiday season this year.

Finally, it has become chilly here at last, so this is the weekend when I'll put away the warmer weather stuff and break out the flannels, tweeds, and corduroys along with ancient madder and wool neckties. 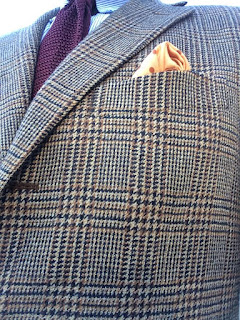 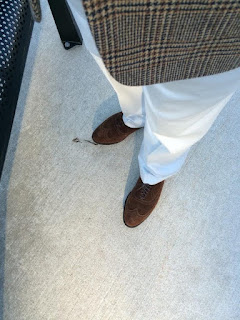 And here's the combination of items for Thursday this week, which included a medium weight wool flannel Pal Zileri three-button sports jacket that I found on Ebay for about US$20 two or three years ago.  Fits like it was made expressly for me after the usual shortening of sleeve by an inch or so.