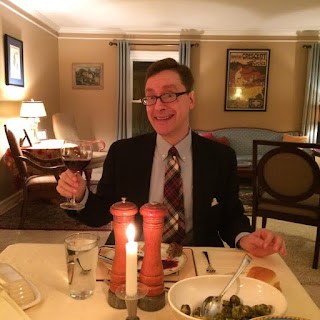 (In a Pathe Newsreel announcer's voice) Here's Heinz-Ulrich after the first sip of wine.  What a lightweight!  It doesn't take much to put him in the party mood.  More seriously, the salt shaker and pepper mill were my maternal grandmother's and were on her dining table all of my life until she presented them to me in 1994 when I left Pennsylvania to attend the University of Wisconsin-Madison.  They have been on my own dining table ever since.  Oh, and out of sight on the lower half, a pair of balck tasseled loafers and some very subtle dark green and maroon plaid wool pants from Bill's Khakis of Reading, Pennsylvania. . .  My old stomping grounds in Berks County. 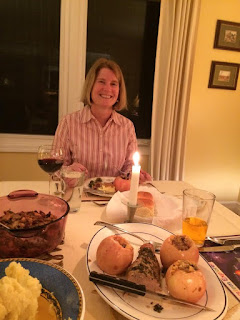 The Grand Duchess enjoys her meal.  We had only just started with the wine, honest!  She also wore a dark red wool skirt and a pair of dress boots with high heels. 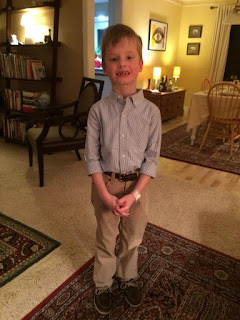 Up and around and into mischief once more, the Young Master models one of his ocbd shirts, a new pair of corduroy pants, and his trusty Sperry docksiders which get a lot of use.  As I explained while helping him dress before dinner, Thanksgiving, Christmas, New Year's, Easter, and a few other occasions during the year are special, so we dress a bit more nicely for these than usual, an example set by my own (transplanted southern) family when I was a child, teenager, and young adult at home.
We celebrated the U.S. Thanksgiving here at Totleigh-in-the-Wold a day later than everyone else since the Young Master had his tonsils removed earlier this week.  So, Black Friday it was.  Still on soft foods for now, but he's not exactly complaining either about all of the pumpkin pie, buttery mashed potatoes, and as much chocolate ice-cream as he can hold.

Apropos the surgery and short hospital stay, we decided to cut back on the food preparation this year and limited Thanksgiving Dinner to pork tenderloin, roasted brussel sprouts, mashed potatoes, and apples filled with a walnut stuffing/dressing plus dinner rolls, cranberry sauce, and spiced apple rings.  Pumpkin pie with coffee followed for dessert with a sip of single malt scotch (Laphroig) in front of the fireplace after the Young Master's bedtime.

It was a delightfully calm meal and evening without the pressure of guests -- with one or two notable exceptions, I, for one, am not troubled by the fact that we are now not within easy driving distance of various extended family members and assorted hangers on -- or preparing a huge laundry list of dishes that go off before we can finish everything.

While few, perhaps, will choose to see my point, I heartily recommend cutting back on the craziness that has become the near two-month "holiday season," here in the United States at least, and that people free themselves from the mental and emotional burden of feeling like they absolutely must accept every invitation, include everyone, and/or do everything.  It's much less stressful, which, in the end, makes for a much more satisfying holiday.  There is enough stress in our everyday lives already.  Why make it part of various holidays too?