How do you deal with bad manners in others? 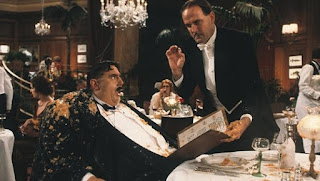 Terry Jones and John Cleese in Monty Python's The Meaning of Life.

How, in the name of all that is great, does one deal with rude behavior or habits in adults?  Not simply around the dining table, you understand, but generally speaking?

As one reader hotly pointed out to yours truly right here at Classic Style several years ago (2013, or 2014?), it is equally rude to draw attention to someone else's lack of manners.  Fair enough.  But that does very little to solve the problem, rife in 2018.  Neither does that mean the rest of us must suffer this brand of fools gladly.

Call it what you will, but lack of basic, poor, weak, or just bad manners make(s) a person less than desirable company.  We are, of course, talking about more unappetizing behaviors here than the now ubiquitous weak handshake.  Use your imaginations to fill in the blanks.

I handle the problem of crass manners in two ways.  If we are talking about the workplace Monday through Friday, I suck it up and say nothing, though I do my level best to limit the amount of time I spend in the offenders' company.  For example, I typically watch where I sit at all meetings where munchies have been touted as an emailed incentive to encourage attendance.  Noisy chewing, loud slurping, and/or visible food in someone's mouth are bad enough, but getting sprayed with minute bits of chewed up food?  I'm not kidding.

In my personal life, I simply do not make myself available a second time around to bear witness to problems like gross table manners, obnoxious children, awkward conversation (including frenetic and lengthy monologues), or even less savory personal habits that said individuals see no reason to control.  Problem solved.

This particular method is not without its own set of difficulties, you understand, especially where certain extended family members are involved, but there you are.  We try not to see them that often.  Physical distance (Jerry Seinfeld's "buffer zone"), the proximity of Lake Michigan, and the mess that is driving through or around Chicago any time of year certainly help us in that endeavor.  More to the point, I believe in being proactive and self-assertive.  Not to the extent of hurting someone's feelings, but I refuse, if at all possible, to put myself in an uncomfortable position a second or third time around.  Time is precious, and life is too short to spend it in unpleasant company or surroundings.

The common argument against the approach I outline above often runs something along the lines of this: "But so and so is really a nice person!"

Hold on a second.  Let's forget for a moment that "nice" has become so overused that is has become a meaningless filler word to all intents and purposes.  "Nice" also suggests certain (near) synonyms like pleasant, enjoyable, satisfying, or charming.  But there is nothing charming about someone who exhibits a lack of basic manners around the table or in daily activities and interactions.

Keep in mind too that some of most charming people I have met have come from the developing world, or economically disadvantaged  circumstances, and a few of the biggest boors with whom I have briefly rubbed elbows hail from the intelligentsia, if I might use that word, or the newly moneyed.  Let's be clear here that coarse manners and uncouth behavior know no strict socioeconomic bounds.  You find extremely polite and (sadly) extremely rude people everywhere although I think the latter predominate in public life more than ever before at this point.

My own view is that, if the person in question is so "nice," then he or she would display a modicum of social grace in the first place.  Greater personal awareness and a smidgen of consideration might -- stress on the word might -- lead to a person at least reining in some of their more egregious (and icky) habits when in the company of others. It usually doesn't work that way in my experience however.

As a reminder, we aren't talking about things like finger bowls, calling cards, white gloves for the ladies, and cotillion etiquette, or the apparently now common practice of not offering coffee to guests after the evening meal, just decent, everyday polite behavior.  Basic niceties if you will.

An individual can, in theory be the most interesting person in the world, but, unpleasant manners and personal habits are a turn-off for many, which can lead thems wot care about pleasant and engaging social interactions to shun an otherwise scintillating persona and riveting personal narrative for more pleasurable company. . .  Or just opt for a good book and a favorite beverage in a quiet spot, after the same awkward scene has played itself out several times already in the more extreme cases.

To close, I am very interested in learning how readers of Classic Style might tackle the same issue.  How do you handle being in close proximity to someone, family member or work acquaintance, who exhibits what we might collectively label "unsavory" habits and behaviors?