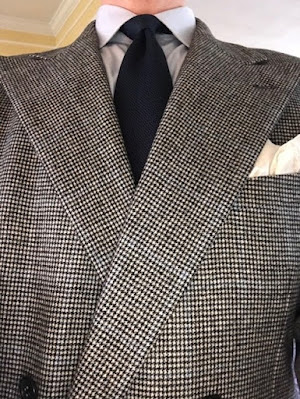 The upper half, featuring a navy grenadine necktie. 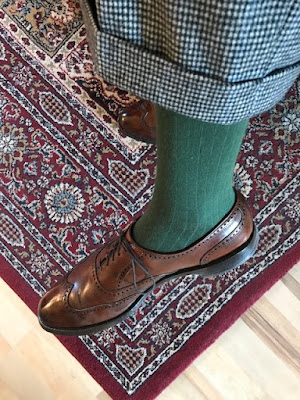 And the lower half, showing off a pair of dark green (Pine?) wool dress socks and the same pair of shoes that have featured here so many times before during this winter.  My wife was already in an early morning Zoom meeting across the hall in the TV room when I dressed today, so I could not access the rest of my shoes residing in a spare closet there.  Still, not a bad combination of colors and pattern.

Having some fun with a vintage Polo number today, which has a 4/1 button configuration.  The double-breasted suit is a heavy wool flannel number with a decidedly 1930s silhouette.  I don't mind though, and, in normal years, wear the suit a couple of times a month from October through early April.

Too much?  To my knowledge, no one has yet complained about my attire during the last couple of decades.  My own view is that one can never be overdressed, and, given the sad depths to which so much of the rest of society has sunk in the last 30 years or so, I'd rather be a little over the top in my attire than appear habitually as though I tumbled out of bed five minutes ago and threw on whatever was handy from the top of the dirty laundry hamper.  Or the floor.

It is very hard to avoid being too studied in one's appearance, however, when resembling the homeless has become almost de rigueur for so much of the population, who would become incensed to the point of violence were one foolish enough to suggest as much.  Herd mentality about describes it.  Why look presentable when so few others do?

Of course, sticking out in any way is not something most people seem comfortable with.  Nothing new there.  But it almost seems like people are proud of appearing cruddy and slightly crusty around the edges.  The Covid-19 pandemic and related lockdowns have not helped the already long-established race to the bottom where appearance and behavior are concerned.  Goodness knows the simple act of wearing a suit gets a man noticed in 2021 since it has become such a rarity beyond a fairly narrow set of socio-professional parameters.

On a related note, I fear an awful lot of guys in our overly casual age suffer from a variety of sartorial neuroses, in addition, that hinder any conscious attempts they might make to improve their day to day presentation.  Assuming they realize to begin with that something is amiss.