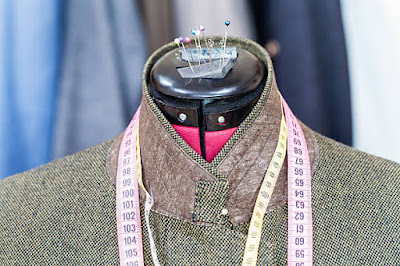 This (Saturday) morning I picked up a couple of suits from my tailor, which were left for minor alterations a week ago, and dropped off several pairs of chinos as well as a pair of khaki shorts that need a button reattached.

My tailor comes originally from Vietnam, where he learned his trade, but has been in Michigan for almost 30 years.  While I was trying on things, a tall, attractive 30-something young man came in with his mother to have a suit altered for a wedding, presumably his from the tone of the conversation.

The two spoke good English with the tailor, but between themselves a variety of Spanish, which given the lisps overheard, I suspect might be Castilian or 'Spanish' Spanish as opposed to Latin American Spanish.  But my own knowledge of the language is very rusty at this point, so I could be mistaken.

Later, my tailor and I chatted while he printed up a new ticket, and I paid for the latest round of alterations.  He shared that his eldest daughter will be leaving for Yale in a few weeks to study Environmental Science.  And apparently she was accepted to four ivy league universities.  Yes!  He was extremely proud as he told me this news, and rightfully so.

While the notion of The American Dream has taken a beating in recent years, it clearly still exists as exemplified by this man and his daughter.  Hard work, focus, and clear goals do indeed pay off.  This young woman surely has a bright future ahead of her.

How nice to see and hear something positive during these otherwise ugly, anxious, and fearful times in which we live.