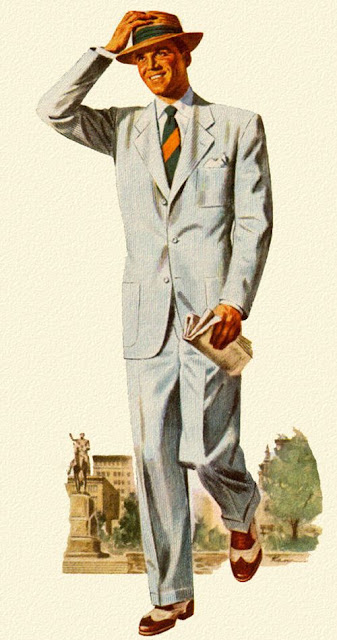 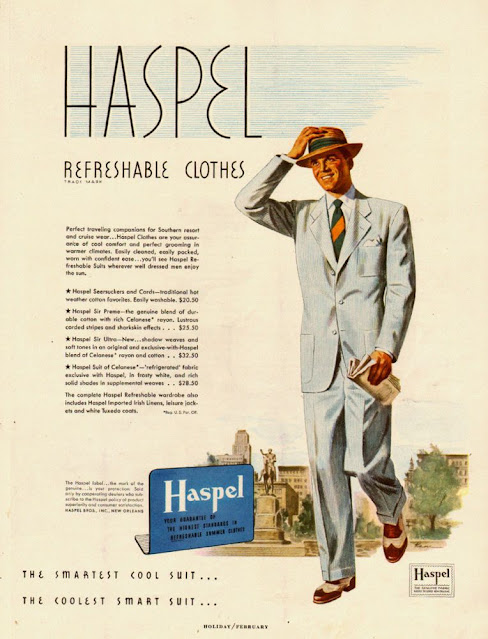 This morning, I dropped off my seersucker suit -- a vintage single-breasted all cotton number by Abercrombie & Fitch -- Don't laugh!  They used to market adult attire and sporting gear once upon a time. -- at the tailor's for some minor fine tuning a month or so ahead of the Fall 2021 semester cranking into action.  Classes begin September 1st.  Sigh.

Now, I am quite sure many people think I look like a major doofus dressed thusly on warm August and September days, but ah well.  Let's chalk it up to lack of knowledge on their part.  Some people don't get out much, so perspectives are often narrow.

And as I say often here at Classic Style, it is entirely possible to look pulled together and eminently presentable, yet remain very comfortably dressed even in hot weather.  Seersucker does the trick as does linen, which was the other suit left for some minor adjustments.

My late stockbroker father -- who grew up during the 1940s and 50s in Florida and Missouri where summers were exceedingly uncomfortable before air-conditioned comfort became the norm most places --  actually owned and wore a seersucker suit on sultry July and August days once he inhabited a corner office back in the 1970s.  So, making the leap into seersucker suit territory myself a number of years ago did not require too much mental effort on my part.  It was already part of the literal and figurative scenery as it were.

In any case, I always find myself looking ever so slightly forward to the start of the fall semester each year 'round about the end of July although summer is only just over a month old by the calendar.  If for no other reason, events leading up to the start of the new semester will give me an excuse to begin dressing more formally for my time on campus most weekdays.

Let's hope our old friends Mr. and Mrs. Covid-19 do not crash the party and derail everything once again this coming academic year.