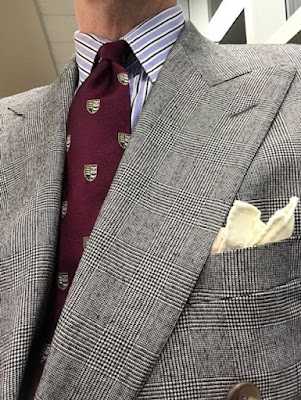 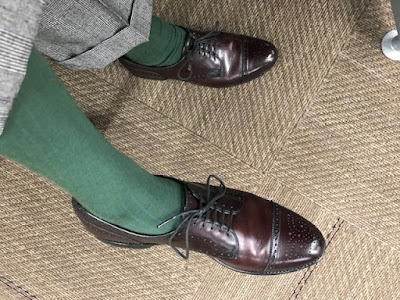 Halloween night, it finally grew cold here at Totleigh-in-the-Wold, so Monday morning seemed like the perfect time to don another one of several double-breasted suits in the fall-winter-early spring rotation.  This particular suit, which has been in my closet for about 10 years, is one of my favorites.

Thanks to some recent alterations due to the great weight loss of 2020-2021, the suit now has an amazing silhouette.  You'll have to take my word for it, given the impromptu photographs above, but I look like I've stepped out of a Laurence Fellows illustration, circa 1935.  The key is waist suppression, which I also had done to a navy blue double-breasted number that shows up here from time to time.

My tailor and I have developed a wonderful working relationship during the last five years that I have been taking him things for alterations.  I simply try things on, stand before his mirror, tell him what I am after, and ask his opinion.  He and his wife also sometimes make suggestions, which always succeed in taking things to the next level as far as fit and appearance are concerned.

As we chat about family or this and that, he pinches things in a bit, clamps or pins, and makes a few marks with his tailor's chalk.  And before my eyes, very suddenly and as if by magic, the suit, jacket, or pants looks amazing.

The work itself usually takes about five to seven days before he texts that the order is ready for pick-up, and his rates, while not always cheap, seem very reasonable based on the online research I've done on pricing by tailors around the U.S.   His expertise is well worth the money and time to have my off the rack things altered, and the results speak for themselves.

I'll try to have my wife take a full length shot of this particular suit the next time I wear it.

I realize that, on campus, I must look as alien as a creature from another galaxy.  When you occasionally see another man dressed in a suit, he is usually a member of higher echelons of university administration, and the suit is, invariably, a single-breasted model, sometimes a sports jacket and odd pants combo, with (thankfully) a tie.

You NEVER see male (or male presenting) faculty in a double-breasted (not to mention a genuine fur felt fedora).  If anyone thinks anything at all as they pass by me, it is probably along the lines of, "Look at that ass in the double-breasted suit.  Someone tell him that Halloween is over."

That's alright with me.  I just figure they don't get out enough.  And besides, nice clothing is only a costume when you don't wear it very often.  Put it on four or five days a week for most of the year, and it soon becomes very comfortable, both physically and mentally.

Lack of self-consciousness in one's attire is a huge part of the battle when it comes to looking good in tailored clothing.  And that comes through actually wearing those suits, sports jackets, and neckties with decent leather dress shoes more than once or twice a year.