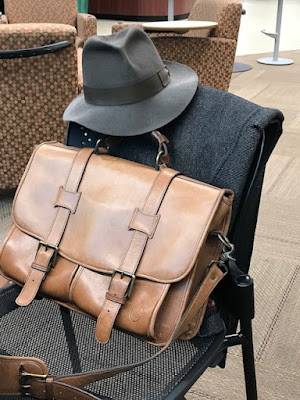 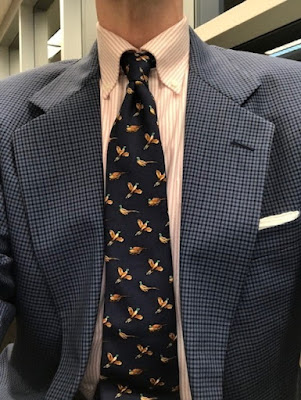 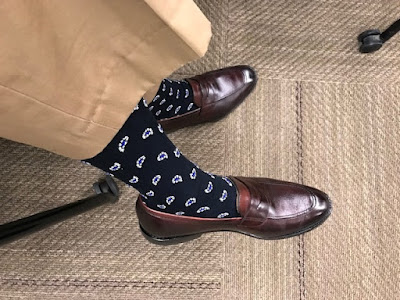 Pheasants and loafers?  Sounds like an old Jack Jones tune.

In an case, here's the attire for today as I shift from teaching  a hybrid course late this morning to juggling one of four or five ongoing projects of my own this afternoon after a spot of coffee and a small lunch.  Highlights include a vintage Polo University Club jacket, a necktie from J. Press (Naturally!), and Lake Forest loafers from Allen Edmonds.

The overcoat is an old Hart, Schaffner, and Marx number thrifted a dozen of more years ago while the fedora for this week is one of several by Borsalino now in regular rotation from October through April each year.

My son. aka The Young  Master, asked me yesterday why I dress so differently from other parents at his Tae Kwon Do studio, where he had a midterm belt test Thursday evening, a retest Friday evening (board breaks), and belt ceremony Saturday morning.  Whew!

I simply replied that a special occasion calls for dressier attire -- the usual blazer, khakis with belt, loafers, and tucked in OCBD collar shirt -- rather than sweats, t-shirts, untucked shirts, grubby athletic shoes, and those god awful hooded sweatshirts we cannot seem to jettison.

Parenthetically, everyone looks like they are ready to knock-off a convenience store in the middle of the night.  All of the time.

returning to the point at hand, I added that my choice of attire is very like how my father, grandfather, and various male relatives across both sides of the extended family all dress/dressed, and I see no reason to buck the trend.  Even two of my much younger male first cousins in Rhode Island and Los Angeles clothe themselves similarly when the need arises.

Not sure exactly what my son thought behind his monosyllabic "Oh." (He'll be 13 at the end of the month), but he has held forth himself occasionally this fall on how sloppily some of his male teachers and fellow classmates appear at school.  I agree , and have said as much in reply to his observations, but I've also pointed out that he needs to keep those opinions to himself to avoid making enemies.  You know, since the genie has been let so far out of the bottle when it comes to what now counts as 'professional' appearance.