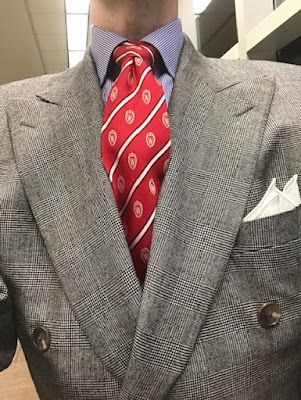 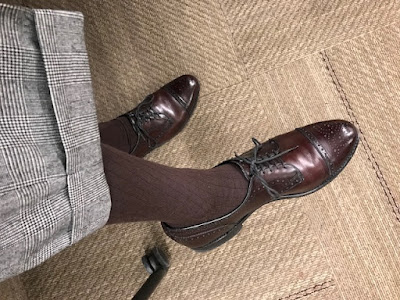 Finally cool enough to break out the double-breasted suits and navy blazer.  Yes!

Today's number is my first such suit, which was purchased a dozen or more years ago after I decided to try DB navy blazer and liked the look.  Now, I am well-aware that there are many people out there who are, for a variety of reasons, uncomfortable (physical or otherwise) with the double-breasted look, but I am not one of them.

While such attire without doubt sets one apart in our age of lowest common denominator clothing, so to do single-breasted suits, jackets, and blazers with a necktie (much less a self-tie bow tie).  It just goes with the territory given the sartorial depths to which most of society has sunk in recent decades.  Heck, the simple act of tucking in your shirt makes you stand out from the crowd almost anywhere these days.

But let's resist the peer pressure all around us, comrades!

Rather than worry too much about standing out when "dressed up," it seems far more productive to continue dressing presentably and go about the day with a smile on our faces.  After all, why allow others' petty anxieties to prevent us from enjoying our attire?

Let us then lead by quiet example and aspire to present ourselves in a favorable and pleasant way.  There are enough blots of one kind or another on the literal and metaphoric landscape(s) already.

We should instead do our small part to create a more pleasant environment for those with whom we interact.  The mindful cultivation of a more pulled together appearance is but one way to do so.