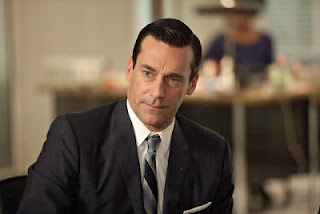 A little bit of care put into your personal appearance goes a long way.  And you don't even need to be as pressed and starched as Don Draper (played by John Hamm) from Mad Men.


“Since the time it was introduced in the seventeenth century, the modern suit has been about two things: power and sex. If you doubt us, try this simple experiment. Some evening, go to a nice hotel bar where you don’t know anyone, wearing jeans and a t-shirt. The jeans don’t even have to have holes in them, and the t-shirt can be clean. Now, return to the same bar the next evening wearing a nice suit. Take note of the difference in reaction from the bartender and of the other patrons in the bar. Remember them.” - Esquire Style Handbook


Well, I don't know about the power and sex bit.  But, I have noticed how a blazer or sports jacket with a clean shirt, a clean pair of jeans worn with a belt, and some kind of LEATHER shoes (or even cowboy boots), to say nothing of a suit and tie, still wakes people up and gets them to pay attention. Fast.

Service people of all stripes snap to it quickly. And everyone else you cross paths with -- women in particular, though my wife refuses to believe me -- will react much more favorably to a guy who looks like he's got his act together than might otherwise be the case. I've experienced this everywhere from university campuses to airports, on planes and in trains, from Barnes&Noble bookstores to the hospital, from large cities to small towns.

It's amazing how just a smidgeon of care about -- and effort put into -- one's personal appearance and the message it conveys will grease the wheels of life.  Considerably.  Try it yourself and see.