Let's find some nice middle ground in our attire. . . 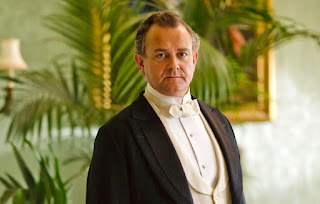 Hugh Bonneville in character as Lord Grantham on the popular period piece Downton Abbey.  Although this photo shows only his top third, he is clearly in extremely formal "white tie" dinner attire.

We here at The Average Guy's Guide to Style are all for smartening up our collective appearance as a society.  And finding a nice middle ground in our grooming and attire is a start.

But a common complaint many guys have is about feeling uncomfortable and constricted when they are dressed up in anything beyond jeans and sneakers (or shorts and flip-flops).  Well, here's a little secret.  If your clothes -- in particular your collar, chest, shoulder, and waist measurements -- are sized and fitted correctly, discomfort will no longer be an issue.  It's very hard to take accurate measurements of yourself though, so get thee to a tailor and have him or her do it for you.

Confidence is another issue related to the perceived level of discomfort that many average guys complain about.  Well, if your clothes are clean, fit you well, and feel good to you, your confidence level will go through the roof.  But be careful.  No one wants to be THAT guy in a blue blazer and white yachting cap at a relatively informal backyard picnic and barbecue in the summer.  And you certainly don't need to put on a suit and necktie to visit the mall on Saturday either.  No, no, no.  But let's ditch the sweatpants, tracksuits and basketball shorts, guys.  There are lots of nice middle ground clothing options between the two extremes that will help you to look like an adult male and avoid resembling an overgrown boy.

Common sense is what is called for here.  Use a little of it and dress for the environment, situation, or event in which you'll partake.  Sure, ratty looking, rumpled, over-sized clothes are fine for raking leaves in the back yard or maybe flopping down on the sofa with a plate of goopy home-made nachos to watch the big game on Saturday or Sunday afternoon.  But otherwise, let's all tuck our shirts back in, hitch our pants up to our waists where they belong, and put on belts before we head out the front door, eh? 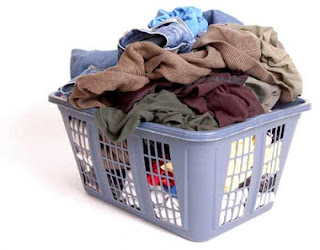 At the other end of the spectrum, here is a basket of rumpled laundry. . .   which calls to mind the appearance of so many guys we see in public these days.  Whether, or not the tech boom of the 1990s is entirely to blame for the degree of sloppiness that now prevails, haven't we lost something as a society in sliding to such appallingly low standards of appearance and behavior?