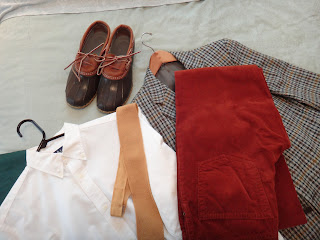 Last Friday's more casual, snowy weather gear.  My wife told me to go back upstairs and change my pants before I left for school.

There are those days when, despite your best planning the evening before, an ensemble just doesn't quite come together the way you thought it would.  And so it was with the clothes above last Friday when we had several inches of new snow on the ground, and I decided on a slightly less formal look for campus.  Nothing wrong with any of the garments, footwear, or accessories by themselves, but it was all a bit much once I was dressed and looked in the mirror.  My suspicions were confirmed by my wife (usually the more stye challenged of us), who sent me back upstairs to put on a pair of more sedate tan corduroy pants before I was able to leave the house.

Later that evening, she gave me a hard time in the kitchen before supper about my initial appearance that morning.  There was much laughter on both sides, but I explained that the fun in nailing down a more adult style comes through experimenting with different things to learn what works, what does not, and so on.  You can't take yourself so seriously that you became fearful of doing something wrong and give up, returning to the sloppy saggy jeans, over-sized shirts, and backwards baseball cap 'uniform' just because it's easiest, and you don't want to stand out from the herd.

Then, there are those days when things come together more easily as was the case with the assemblage of clothing and footwear yesterday in the photograph below.  I think that's because things were kept much simpler with regard to color and pattern.  The only really wild thing was the socks, and those were invisible unless I was seated, which is not usually the case when I am leading a class at the front of the room.  In any case, the socks received wifely approval when I showed them to her later yesterday afternoon, once we were both home again.  So, balance was restored, and all was right with my sartorial world once again. 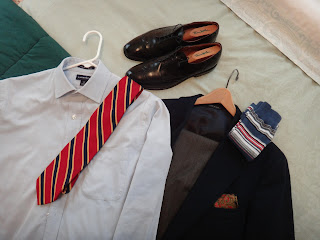 The message to take away from today's post is this, guys.  Try moving away from a strictly monochromatic appearance for those occasions when you dress (unless attending a funeral).  Navy and gray are fine and versatile, but they can be overdone.  No one is suggesting that you need to become peacocks and go overboard with a riot of color by any means.  But a little bit of color and pattern won't hurt you either, and it will help you kick up your style several notches once you become comfortable with and skilled in adding one or two eye-catching garments or accessories to your overall look for the day.  Don't take yourself too seriously here.  Give it a shot and realize that once in a while you won't quite nail it.  But you'll still look miles better than most of the other guys you'll bump into.