Add Some Subtle Pizzazz to Your Look. . . 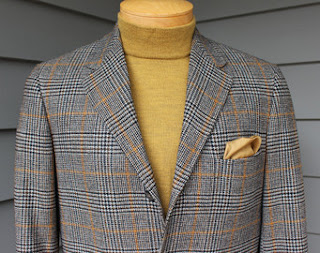 The word for today is "pattern."  In short, guys, don't fear it or shy away from it.  Sure, navy and charcoal have their place for more conservative suits and blazers or sports jackets, but, as my grandmother used to say, "Live a little!"

Glen plaid and houndstooth are two very traditional patterns that will easily liven up your wardrobe a bit.  And, contrary to what many guys fear, they'll do so without making you look like the slimy Herb Tarlek on the old WKRP in Cincinnati TV program.  The trick to avoiding Herb's look is to keep everything else really, really simple.  Especially because both glen plaid and houndstooth are such dominant patterns. 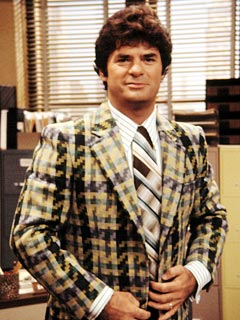 Herb Tarlek from WKRP in Cincinnati.

To avoid aping Mr. Tarlek's tacky 1970s appearance above, I'd suggest a plain light blue oxford cloth button-down shirt and with either charcoal flannel, or tan corduroy pants along with oxblood loafers or some kind of wingtip in oxblood, tan, or dark brown.  Don't forget to match your belt to your shoes as much as possible though!  Dress up the look even more with an understated wool necktie.  Maybe in a solid navy or gray?  Or, for a more jaunty look -- ala the late Steve McQueen -- how about a turtleneck like those shown in today's photographs?

The point is, guys, you need more than just a single suit and one navy blazer in your closet.  Those two items are a start, but they are only part of the picture when it comes to cultivating a more adult wardrobe.  Adding a couple of sports jackets like the ones pictured at the top and bottom of today's post will provide not only more visual interest to you wardrobe but also considerably greater versatility.  The trick is in keeping the rest of your clothing simple and understated, to avoid the used car salesman look like we see in the middle phototgraph.

But with that in mind, there is nothing whatsoever to fear about patterns.  They can be our friends if we just give them a chance and learn how to incorporate them into our overall look, so that the result is visually pleasing. 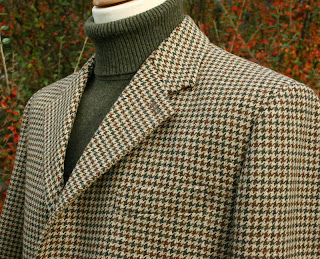