Those standards? Keep 'em up! 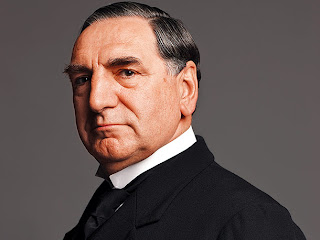 Mr. Carson, head of the household staff along with Mrs. Hughes, on Downton Abbey.  This image comes from the PBS.org website.

Lot's of men's clothing websites and blogs out there  have the word 'gentleman' displayed prominently somewhere on their landing pages, or embedded within their content.  But it's a mistake to assume that clothing alone will make the man.

I'd even go so far as to suggest that it's more the way we men conduct ourselves, alone and in the company of others, that determines how close we come to actually being a gentleman.  And that has to do with standards of behavior.

Now, I'm not talking about arbitrary standards here, but accepted social conventions that, in many cases, have been around for centuries.  Things like:

-- Basic table manners.  Think about your elbows, a napkin in your lap, chewing with your mouth closed, swallowing food before you speak, asking for things to be passed to you, etc.

-- Keeping your voice down in public spaces and in conversation.

-- Firm handshakes on meeting someone for the first time, accompanied by "How do you do?"

-- Looking at people you are speaking with. . .  Ooops!  I ended that sentence with a proposition.

-- Careful consideration of how our actions and words might affect, inconvenience, or offend others before we do or say something. It's called self-control, and sometimes keeping things to ourselves is best.

-- Stopping a behavior others might find irritating or offensive when they ask without continuing or making any sarcastic remarks about it.  We are adults after all.

-- Not droning on endlessly about ourselves and our problems (outside of the therapist's office) in polite company.  When someone asks how you are, it's always better to say something like "Fine, thanks.  And you?"

-- Never asking someone else what they earn, how much they paid for something, or where/how they got it.  If they want us to know,  trust me, they'll volunteer that information.

-- On a similar note, and bucking the current predilection for over familiarity and false bonhomie, I suggest sticking to the old fashioned habit of keeping things like politics, sex, sexual orientation, money, and spirituality to yourself.  At least until after you know others really well.  And -- Surprise! -- that takes longer than a couple of drinks and chit chat at a bar or party where you've just met for the first or second time.  Far better to keep a few things private and maintain a bit of mystery about yourself.

-- Show some discretion when doing things like blowing our nose (never at the table), sneezing, or hiccuping.  A rapid and polite "Excuse me" always helps.

-- Not announcing loudly that we need to visit the men's room each and every time we are out and about at the mall, restaurants, or elsewhere.  And never, repeat NEVER discuss your activities or experiences therein.  Some things are best forgotten.

-- Peppering our conversation liberally with the f-bomb and various other obscenities.  Newsflash, guys. . .   It doesn't make us look or sound cool, edgy, or intelligent.  Quite the contrary.

-- And the biggy. . . absolutely no belching or passing gas around others, or in public spaces.  It's just base.  No one should have to endure your intestinal issues or puerile sense of humor.  If you can't control it, see your doctor, or visit the drugstore/pharmacy for an over-the-counter remedy.


Undoubtedly, there are other polite standards and conventions that I'm not thinking of at the moment, but these are a few solid ones with which to start should you need to brush up.  Become reacquainted with them and practice religiously until they become ingrained habits.  They will certainly take you far in any interaction you have with others, both within and outside the home.  And -- Dare I suggest it? -- these polite conventions will also help you behave like and resemble a true gentleman far more than that expensive new pair of shoes or tailored suit might.