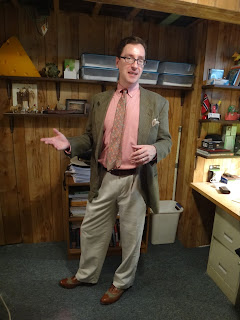 "Here's the thing about Horror films. . . "  The hot weather teaching ensemble for today.  And yes, those are a Wisconsin cheese head and a fake artichoke on the shelf over my right shoulder.

The mostly pleasant summer we've had in my part of the American Midwest has turned hot, sticky, and uncomfortable at last.  Just in time for the start of school and dressing like one gives a darn.  Typical.  Still, one can keep things pretty casual and comfortable without giving up completely and going the t-shirt, cargo shorts, flip-flops, and backwards baseball cap route.  Today's ensemble consisted of the following items:

Strangely enough, lot's of people in Male Fashion and Style Blogland have problems with pleated khakis, especially Dockers.  Beats me.  Maybe it's because they get grubby quickly if you aren't careful?  Maybe they are too 90s?  If so, then pleated Dockers must certainly be one of the less offensive things still hanging around almost a decade-and-a-half later.  And if worn as part of a hot weather casual ensemble like this one, pleated Dockers don't look too bad.  In heat like this, you're going to look rumpled no matter what, so you might as well go with what you like and what looks good, i.e. well-broken in, comfy linen and cotton.

I felt relatively good about today's ensemble, and hey, my wife dug (I mean REALLY dug) it enough to snap a few photos of ol' Heinz-Ulrich emoting in the basement office.  So there we are.  The stamp of female approval.  And if my introductory remarks about Horror Cinema, the syllabus, and course policies bored any of my students during our first meeting, then at least I was fairly interesting, visually speaking, for 75 minutes, considering so many college kids these days seem to come from families where they have rarely seen a man don a jacket and tie for any reason other than a very occasional wedding or funeral.

We can blame some of that, I suspect, on the over-casualization of American life these last 20 years or so.  Social change is fine and sometimes even necessary, but let's not throw the baby out with the bathwater.  Unfortunately, that seems to have happened in many facets of life in recent decades.  A wee bit of familiarity and comfort with a few of the slightly more formal conventions of daily attire and behavior than we typically see most places in 2013 would be a good thing.  Who could possibly object to that?