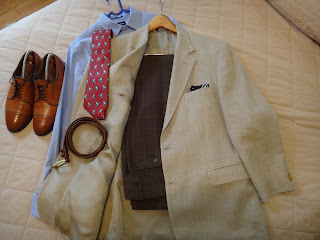 Day #1 of the Fall 2013 semester: Allen Edmonds shoes, Brooks Brothers linen-wool-silk jacket made in Italy, Bachrach wool pants made in Italy, and an Italian parrot necktie (a gift transported all the way from Florence by dear ol' Mom in 1995).  The only items purchased new (on sale however) were the shirt, belt, tie, and pocket square.

Until a couple of days ago, when the fall semester began in earnest, there has been little recent occasion for me to post photos of yours truly modeling my more professional gear here.  My wife and I are fortunate enough to enjoy two-and-a-half month summer vacations from the end of May to just after mid-August.  One of the benefits, you might say, of teaching college students and attempting to broaden their young minds.

So, it seems like high time to rectify that omission by sharing  a couple of  impromptu photographs from the past two days.  Now, my wife is rarely home when I arrive in the afternoons, to snap a few photos of ol' Heinz-Ulrich before he changes into more casual clothes, so you'll need to make due with these.  I just can't bring myself to take self-photos in the bathroom mirror!

Anyway, both ensembles shown are fairly casual combinations of medium to light-weight odd sports jackets and pants.  Each combination would also look reasonably good without a tie, provided one wore a button-down collar shirt.  Straight and spread collar shirts look a little off when worn open-necked without a tie.  Kind of like the guy in question has forgotten something.  "Know what I mean?" as acting great Michael Caine might ask.  But that's just me.  There might be some out there who can pull it off.  I've just not met them in my neck of the woods.

As far as the fit of everything goes, I opt for a full break in my pants and have them tailored accordingly.  I also ignore the current trend for skinny and, instead, prefer a higher rise that comes almost to my navel and pleated waists on my pants. I prefer Classic over Trendy.  While I like and repeatedly ask my tailor for about 3/4" of shirt cuff to show at the ends of my jacket sleeves, it is hard to get her to cooperate sometimes, so it's usually more like 1/2" when all is said and done.  And I can live with that.

Besides that one little finely nuanced point of disagreement, Mrs. V. and I have a good working relationship.  Kind of like Jeeves and Bertie Wooster I suppose.  Mrs. V.'s turnover time is relatively fast, and her rates are reasonable.  Not bad for a smaller city in the American Midwest where tailors are few and far between.  I don't know what I'll do when she finally retires.  We might have to find a new city of residence.  Hey, a guy can dream, right?

Returning to the point at hand.  The next order of business is to have the waists of my suit coats and jackets suppressed a bit, time and money permitting, since I'm still fairly trim.  A 39R or 40R jacket, while fine in the shoulders and chest, more often than not has excess material in the waist area.  Part of that could be because so much produced and/or sold in the United States has that "sack cut."  That's great if one is going for the preppy or trad look, but I prefer a slightly more shaped British or Continental cut.  That, however, is a topic for another time.

Anyway, the point of all of this is simply to illustrate that an average guy can get with the program, pull himself together, and look sharp without it costing heaps of money and without wearing a dreaded suit.  Assuming that average guys do indeed dread traditional charcoal or navy blue business wear.  From what I observe, many do.  While I'm actually a fan of suits and have a few different kinds hanging in my closet, my favorite look is an odd jacket of some sort combined with a pair of wool or corduroy pants, depending on the season, and a necktie with some kind of white or blue shirt.  And I'm embarrassed to admit how many neckties now hang in my wardrobe.  I know, I know.

Well, that's more than my two bits of style philosophy for today.  Thanks for reading if you're still here, and do be good enough to drop by again soon. 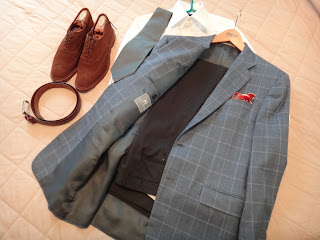 Day #2 of the Fall 2013 semester:  Allen Edmonds suede shoes, Hickey Freeman wool sports jacket, Luciano Barbera wool pants, plus an Italian tie and pocket square.  Once again, the only items purchased new, though on sale, were the belt,  shirt, and shoes.