A Personal War on Casual? 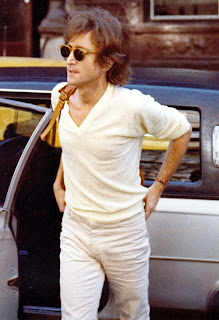 The late John Lennon in 1980.  He was about 39 or 40 here.  What do you notice?  Yep.  Extremely casual, but no sign of sweatpants or  the dreaded backwards baseball cap.  He looks good.  Like an adult male dressed for a relaxed day in the city, or at the recording studio.  We can't see Mr. Lennon's feet, but I'll wager he wasn't wearing flipflops either.  And he even seems to be hitching up his pants as he exits the car.  Imagine that!
Hardly.  But a war on guys dressing like they are terminally 11 years old, or the corner methamphetamine dealer?  You bet.  It's time to make the distinction between the perpetually sloppy on the one hand and a more pulled together casual look on the other.  Let's get some clothes and real shoes that fit, tuck those shirts in, purchase a few belts to keep the pants up around our waists where they belong, and ditch those godawful backwards baseball caps.

Certainly, no one is saying that you need to shower, shave, and dress to the nines before making a late-night trip around the corner to the nearby convenience store for that half-gallon of milk.  But there's a happy medium between getting all gussied up ala Cary Grant and routinely looking like you spent several nights sleeping rough under some shrubs in the local park.  Wouldn't you agree?

There's a a lot to be said for taking a little time to learn how we might improve our appearance and then making the effort to do so.  At the very least, the "I don't care what anyone thinks. Screw 'em!" attitude has been done to death over the last 40+ years.  It's high time to up the ante and stop letting it all hang out, men.  Let's get with the program once more and start dressing like we give a damn.  Even when the dress code is casual.

First and foremost, let's demonstrate to ourselves and the rest world that we have, on reaching adulthood, acquired a little grooming, taste, style, and sophistication where our attire, daily behavior, and worldviews are concerned.  There is nothing whatsoever silly or effeminate about making the effort to do so if the example was not part of one's upbringing.  You know what?  It's ok to be upwardly mobile in one's personal as well as professional life.

I'll go way out on a limb here and assert that genuine attempts to spruce up the presentation of oneself are preferable to the alternative.  Perhaps if more guys made a slight bit of  effort with their attire and demeanor -- and no, neckties don't always need to be part of that -- they might feel better about themselves and mind their social Ps&Qs more closely in their interaction with others?  Even when doing something as innocuous as killing time on one's I-phone or Blackberry while using public transport.

And who knows?  Human society, which leaves quite a bit to be desired in many instances if we are absolutely honest with ourselves, might improve a bit over time as a result.  Imagine how pleasant that could be.  A simplistic point of view?  Horribly naive?  Maybe so.  But there is, nevertheless, something to it with regard to our observing basic levels of civility.  It starts with appearance and behavior.

At its root, my attitude about the kind of clothes we as men wear, how we conduct ourselves, and the way others see us as a result is simply about basic self-respect, a smidgeon of  self-discipline, and consideration for others.  It's about a fundamental level of awareness, realizing what is appropriate, when, and where.  With that in mind, my thinking is about putting our best foot forward whether we are by ourselves, at home with the family, or out amongst the public in some capacity.  It is an indisputable point.  Old-fashioned?  Perhaps.  Out of step with much of society at present?  Certainly.  But outmoded?  Never.

What are your own thoughts on the matter?  I'm interested to know.  Please take a few moments to leave a comment, but, please, let's keep it clean and civil.