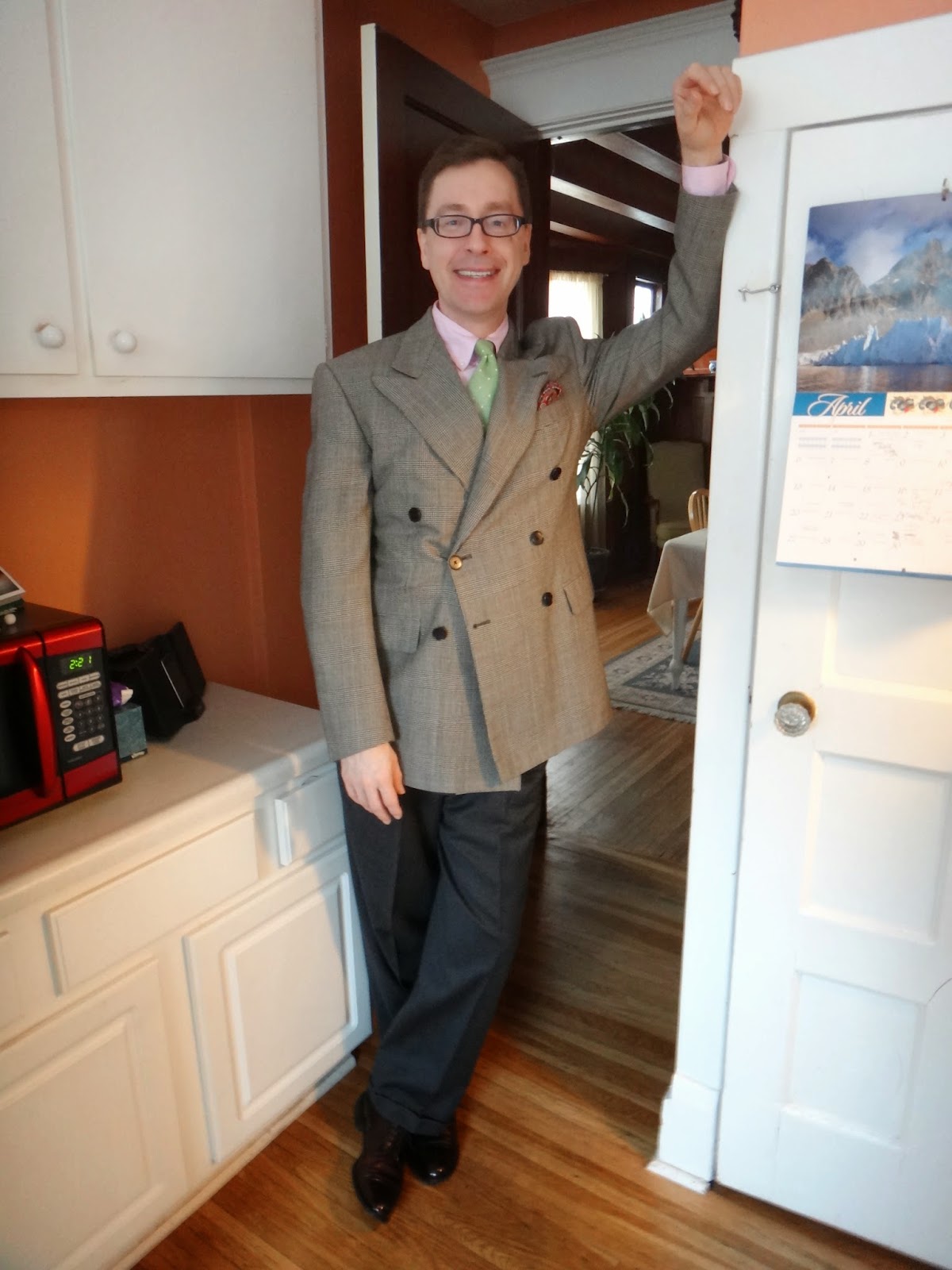 The attire for a chilly, wet April 2nd.   A wool flannel odd jacket and pants combo, pink ocbd shirt, Allen Edmonds captoe oxfords, and silk-cotton blend Italian necktie plus Italian pocket square.  Look closely, and you'll note four patterns altogether.  Yikes!  Who in the world does that?  Search me, but this combination of garments and accessories seems to work fairly well here.  And if my students aren't interested in what I have to tell them, they can at least stay awake during classtime by looking at me.

It was on a cold, rainy spring day very like this one in early April of 2001 (a Thursday), that I ran down 4th Street in the Dinkytown section of Minneapolis after this kooky, quirky blue-eyed, Swedish-American gal whose desk was near mine in the grad student teaching assistant office we shared at the University of Minnesota.  She was on her way to order a cap and gown for her upcoming Ph. D. ceremony a few weeks later.  I was on my way to catch a bus home for the afternoon after teaching and some early afternoon classes of my own.

We bumped into each other unexpectedly at a traffic light on the corner of 4th Street and 15th Avenue SE, exchanged the usual “Hi,” and continued on our separate ways. Until something inside me screamed, “Go after her you idiot!” You didn’t know people can run several city blocks in Dan Post cowboy boots, did you?  Well, I eventually caught up to the young woman in question and spent the rest of the afternoon carrying her stuff as we made our way around the Graduation Fair in the U of MN Fieldhouse.

Later, we shared a Pappa John’s pizza that evening and whiled away the hours talking about this and that until she finally went home sometime after 9pm. It was one of the nicest 6-7 hour periods I’ve ever spent with anyone. Oh yeah. Almost forgot. We were married in June 2006.  Funny, the things that remain etched in your mind as if they happened yesterday.

The lesson in all of this is that sometimes -- whether it has to do with education, career, or matters of the heart -- you've gotta jump in feet first and hope things turn out well.  Don't shy away from taking chances and making decisions.  Otherwise, you might miss out on some nice things that life sends your way.