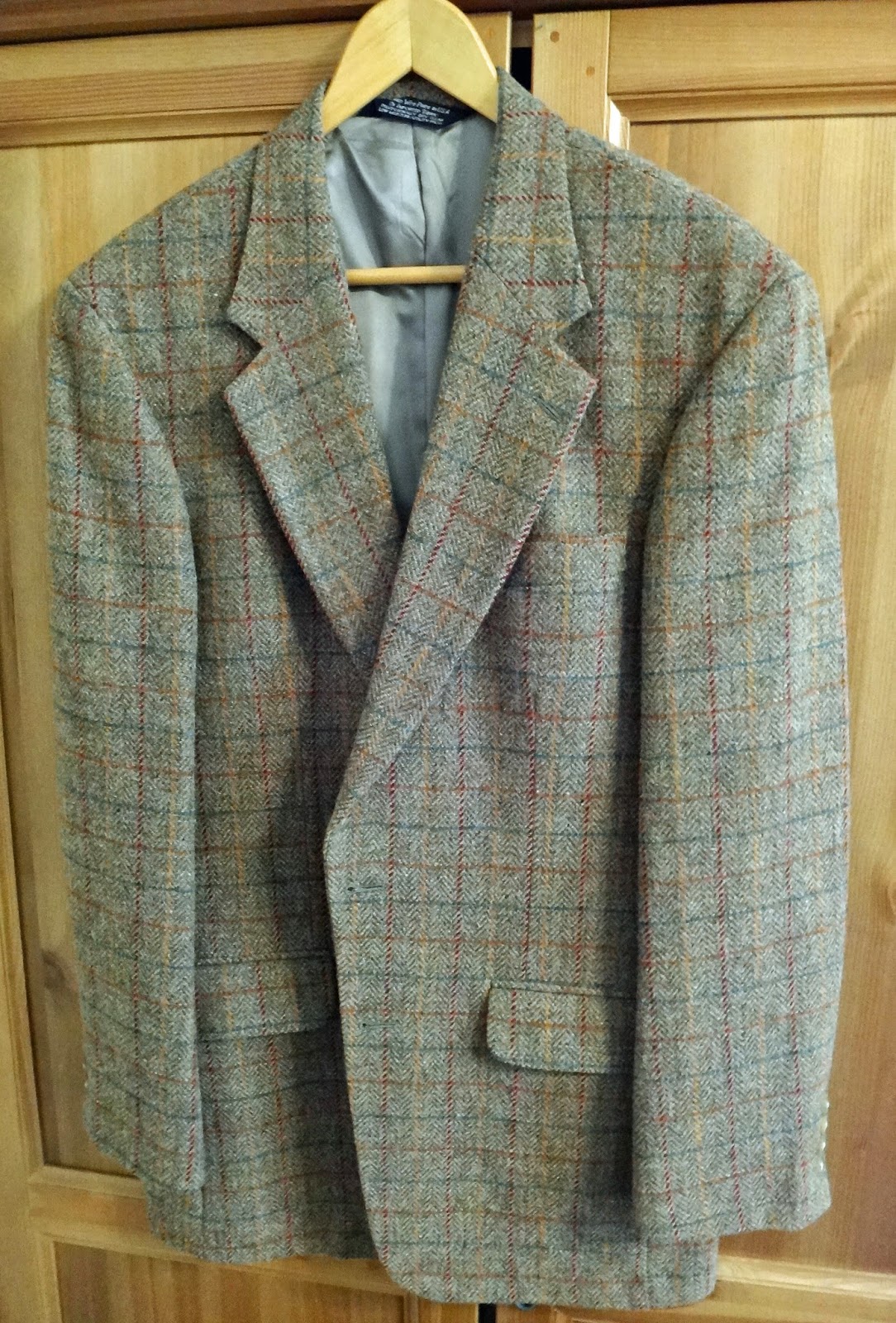 The latest acquisition (for less than US$8), a Harris Tweed jacket by Land's End when they still produced their items in the United States.  A medium weight 40 Long with moderate shoulders, fully lined, a working boutonniere hole in the lapel, and just roomy enough for a thin sweater underneath.  How could I pass it up?

Every once in a while, you have one of those incredible fall days.  You know the kind I mean.  Besides the bright sunshine and warm temperatures, it has been breezy, quiet, and calm.  After a quick trip following lunch, to browse my best local thrift/charity spot (where I found the jacket above), we loaded into the car and rode five minutes over to a large local park where we usually ski and toboggan in the winter.

Once there, the three of us spent a glorious 90 minutes or so there, walking the paths, playing in the leaves with the Young Master, taking some pictures of him, and letting him run up and down the huge hill where we toboggan in the snow before we piled into the ol' jalopy yet again and headed to our favorite cafe for some coffee, hot chocolate, and milk along with a couple of large cookies.  The Young Master, who turns five on Monday, suggested that we sit at one of the tables on the sidewalk out in front, and the three of us lazed away there for an hour before coming home.

It is now just after 4:30pm here.  The Young Master is reading quietly on his bed for his daily "quiet time."  Richard Scary's Best Storybook Ever was the choice for today.  The Grand Duchess is making a list before running over to the supermarket for a few things, and yours truly is enjoying a bit of time to himself here in Zum Stollenkeller.

Two moderately amusing stories from today to share.  Just bear with me.

First, the jacket above was actually handed to me by another shopper (trailing along behind his wife) at my favorite local thrifting haunt.  He was a tall, trim, handsome man, around 50, with lots of silvery hair, who must've spotted me perusing the racks of suits and sports jackets.  He walked over and handed the jacket to me, saying ,  "Here.  Try this on.  It's a Harris Tweed."  Ah, I thought to myself.  A kindred spirit.  There aren't many in my small Midwestern city.

Since my anonymous helper had apparently just tried on the same jacket, my guess is that he had also determined it would not fit his frame.  He was, after all, somewhat taller and a bit heavier than me.  Well, what could I do but try it on right then myself?  Since the fit was so nice, it took no internal dialogue whatsoever with myself before I thanked my fellow sartorial voyager and waltzed up to the cash register to pay for the item in question.  The jacket needs the usual dry-cleaning and sleeve shortening, care of my tailor Mrs. V., but what an addition to the autumn and winter wardrobe!  I'll never turn up my nose at a Harris or Donegal tweed sports jacket. 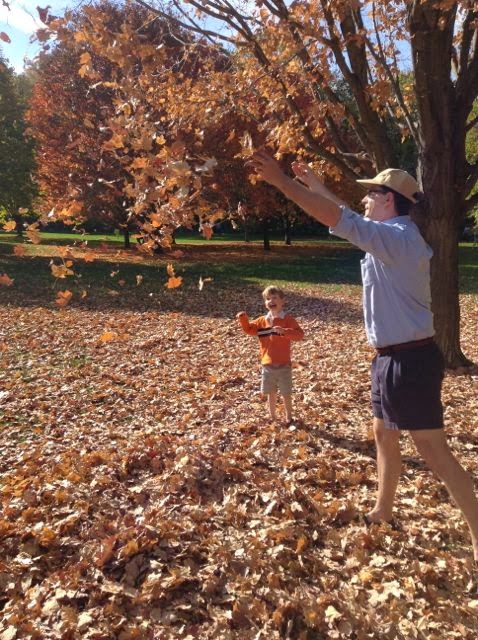 The Young Master and yours truly, fooling around with late October leaves in the park on a beautiful, quiet Saturday afternoon.

Much later this afternoon, as the Young Master and I waited at our sidewalk cafe table for the Grand Duchess to join us with the beverages, I began speaking to him in German, the language his mother has spoken to him since he was a baby.  Although he is effectively fluent in that language at this point, the Young Master answered me in English with, "Dad, please speak in English."  When I countered in German, reminding him that he and I can also speak together in German, plus some Norwegian, he replied in a humorous yet firm tone, "Yes, but we don't want to right now!"  Sigh.  Young Master -- 50. . .  Dad -- Zilch.

It is worth noting that the Young Master's response did provoke considerable laughter from us.  This latest linguistic defeat notwithstanding, it has nevertheless been a truly wonderful family weekend afternoon.  Happy, contented sigh.