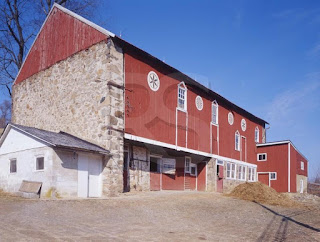 One of many familiar barns  very close to my grandparents' old place in District Township, Berks County, Pennsylvania.  Note the Pennsylvania German hexsigns to ward off evil spirits.  If memory serves, this farm is where we once pulled over on a frigid early winter's evening when I was about nine to let the farmer know that his large herd of Holstein dairy cattle was loose and spread out across and along the road.  He must have been hard of hearing because my sister and I banged on a barn window for quite some time until our knuckles were blue.  I guess the old man thought we were playing a prank on him because he was nasty when he finally noticed us and came to see what we wanted. 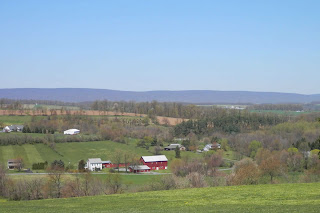 A beautiful panorama of the Berks County countryside. 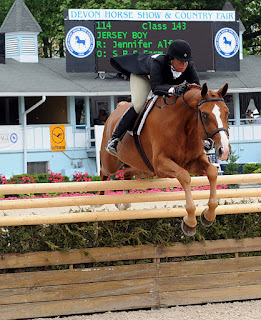 The annual Devon Horseshow, closer in to Philadelphia on the Mainline, was a favorite event for Mom, my sister, and me.  Always wanted to ride in it, but never could get the hang of cantering properly on horseback, so jumping was out.  Fast-forward to 2015, and I have found a stable near our new diggs in Michigan where the Young Master will give riding lessons a try net summer to see if it it something in which he might be interested for the longer term.  Come to think of it, ol' Dad might climb back in the saddle for a few lessons too. 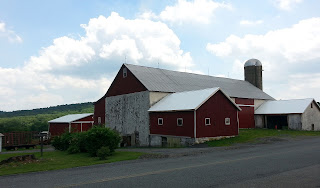 A photograph of my late schoolbus driver's farm in Landis Store.  Rob Weinsteiger died several years ago, but he drove old Bus #20 for decades from September through June each year, hauling a bunch of disrespectful, noisy, and sometimes just downright naughty middle- and high school students to and from school five days a week.  An extremely patient, kind-hearted individual I think from the vantage point of an adult very close to becoming "a certain age." 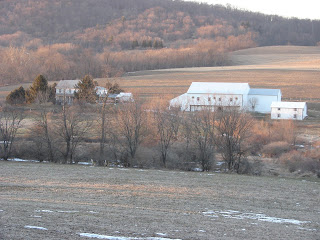 Another nice panorama of some old farm that I recognize instantly, although I can't tell you exactly where it is in relation to my grandparents' place.  You really do begin to take all of the wonderful scenery and old structures for granted when you see them on a daily basis. 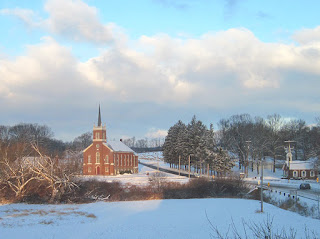 Huffs Church, about five to seven minutes from my grandparents' place and home to two different Lutheran congregations who share the premises.  Many of my schoolmates continue to attend each Sunday even now.  Until the mid- to late 1980s, the church lacked a steeple, which was only replaced then after doing many years without although the replacement is much smaller than the original judging from old photographs I've seen.  When I was a boy in the 1970s, a Great Horned Owl used to perch on on the four finials at the top of the tower at dusk each evening.  We observed it many times when we drove by on some errand or other.  There was also a working General Store -- Pilgert's -- just behind the vantage point of the photographer here until about 1985 or so.  We occasionally bought milk, bread, and other similar last minute items from Lloyd Pilgert himself.  These days, you must ride down the hill to a Turkey Hill Minute Market on the treacherous Route 100.  The former general store has been a bed and breakfast for many years now. 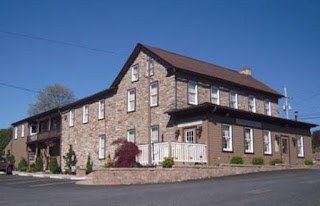 The Landis Store Hotel, five minutes up a steep hill from my grandparents' place at the intersection of Conrad, Forgedale, and Baldy Hill Roads. When I was very small in the early 1970s, and I have distinct memories of this, the porch was still open, there was a bar on one side, a general store-post office on the other and an old-fashioned hand-cranked (leaded) gasoline pump outside just to the left of the porch about where the retaining wall and steps are now.  The current manager and chef, Gary, is a former schoolmate of mine, who, apparently, took over from his parents, Gary Sr. and Janet Henshaw, some years ago.  His Aunt Marilyn Hofman, Janet's sister, is still the Executive Chef.  Janet and Marilyn's parents, the late Ralph and Helen Hoffman (close friends of my grandparents) bought the place in the early 1950s and ran it until the early 1970s when Gary and Janet took it over and recast the establishment as a place for fine dining, which it remains.  The Landis Store Hotel -- locals called it "The Store" when I was young -- was once mentioned (and possibly featured) in an issue of the defunct Gourmet Magazine many years ago.  We routinely enjoyed evening meals there throughout my formative years. 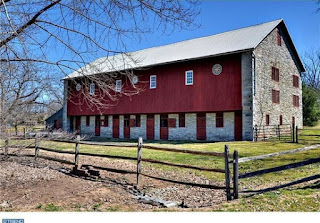 I think this barn is on Forgedale Road just below Landis Store where my sister an I took horseback riding lessons for several years from Joy McCarty (Mrs. McCarty to the children), who taught English-style riding.  The McCarty's were one of a then fairly small group of Philadelphia and Allentown families who had moved to the country in the late 1960s-early 1970s.  Oddly all horse people.  My family was part of that set although it isn't like there was that much socializing between us, but we all knew each other and attended school with most of the children with whom my sister and I were friends. 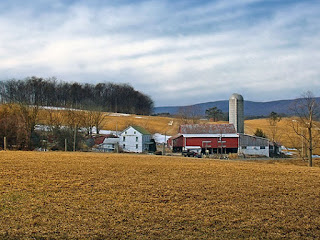 Another farm very close to my grandparents' house in the vicinity of Landis Store. 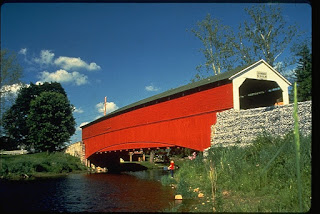 This is an apparently recent photograph of the old covered bridge over Maxatawny Creek near Pleasantville, PA at the corner of Covered Bridge Road and Tollhouse Road.  The bridge is, amazingly, still open to automobile traffic.  My parents owned an old place for a few years about five minuets to the left on Tollhouse Road.  A couple of schoolmates of mine, Robert and Richard Hartz, lived on a large dairy farm just to the right of the bridge here.

Here is a panoramic shot taken from Pulpit Rock in Berks County, Pennsylvania.  Glad to see that it still looks like this.  I haven't been back to eastern Pennsylvania in over 20 years. 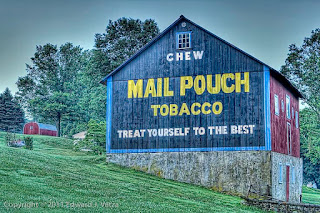 Can't quite tell if this is a photograph, or a painting, but this barn, on Oysterdale Road in Colebrookdale Township I believe, is very close to my grandparents' place in District Township.  The old tobacco ad was faded but still very evident when I was a boy and teenager in the 1970s and early 1980s. 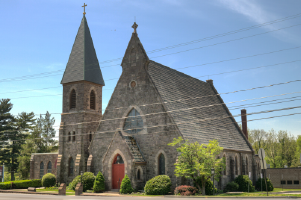 Finally, a shot of our old Episcopal (Anglican) church, Saint Gabriel's in Douglasville, PA in neighboring Amity Township.  The minister when I was a boy and young teenager was the late Father Kenneth T. Cosby, who waded ashore with the U.S. Marines at Okinawa while under heavy enemy fire.  My sister was baptized here, our grandfather served on the vestry for many years, our grandmother was active with the local chapter of The Episcopal Church Women (ECW), and my Anglo-Catholic uncle delivered a few guest sermons after he was ordained in Britain back in the mid-1970s.

Since I have occasionally mentioned the area where I enjoyed my formative years on Classic Style for the Average Guy, I thought it might be fun to share a few photographs and recollections with you.  None of the pictures are mine, all having been culled from the Web.  If you spot your work here, please let me know if you would like it removed, and I will do so ASAP.  Even better, and if you don't mind having your pictures shared here, let me know who you are, and I'll mention your name in the caption.  At some point, once we are in our new house, unpacked, and settled again, I have a bunch of pictures of my grandparents' old restored fieldstone place and surrounding land that I must digitize to share here too.  In the meantime, enjoy perusing these.