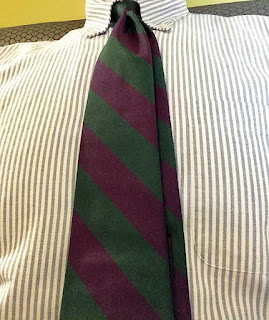 The top half today.  The navy blazer (just back from the dry-cleaner's) with a yellow paisley pocket square peeking out from its pocket are sadly absent here. 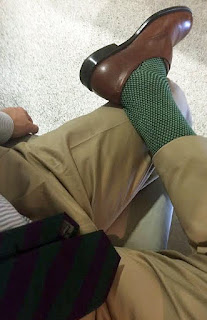 And the bottom half.  The belt was tan leather to, more or less, match the monkstrap loafers.  The khakis are a recently purchased pair of Land's End non-iron chinos, which might offend ivy/trad/preppy purists, but there you go.  The pants nevertheless hold a crease well and stand up to lots of wear and tear, so long as a jar of spaghetti sauce doesn't explode in your lap.


Wasting time with the smartphone this morning during office hours.  It's funny what you do once the day's prep is done and no students come to see you.  That will, no doubt, happen later in the semester once the first papers have been returned in about three weeks' time.

There are always a few students whose work earns a lower grade than they expect, which they naturally challenge.  That might be thanks to the tendency of so many parents to overdo it with praise even in those rare instances when, just maybe, none is warranted.  You know, "For the tenth time, I said stop pulling the dog's tail!  We don't mistreat animals.  Now high five me Buddy!"  It might also have to do with the tendency of our K-12 education system in the U.S. to award high grades simply because pupils write their names across the top of a sheet of blank paper.

The situation is not quite that extreme, but you get the point I think.  In any case, it can be frustrating when dealing with ostensibly young adults at the college/university level who desire a high grade without any actual work behind it.  Not all students are like this, of course, but there are enough of them each term.  Let the whining begin.  I suspect it has replaced baseball as the national pastime in this country at some point during the last quarter century.

Years ago, when I was a graduate teaching assistant working closely with the professor who taught a large undergraduate literature course (about 400 students), we had one young lady with the unfortunate last name of 'Weiner.'  Naturally, when the first essay exams were returned after grading at the start of Week Seven, we learned that the young Ms. Weiner did, in fact, have a knack for the activity.

That was almost two decades ago, but if memory serves me correctly, the 'A' she received on her exam was not a high enough 'A', the coveted A+.   Which, of course, she assured us she always received for all of her courses in a small Wisconsin high school somewhere upstate as though that would/should/could somehow make a difference to those of us instructing her at UW-Madison.  You tend to remember stuff like this because it is so outlandish.  Even years after the fact.

I had another student in another section of another large undergraduate literature course a semester or two later who had similar problems in that the quality of her written exams did not match up with her desires and expectations.  She requested an appointment with me one Thursday afternoon just as class finished, and the other students filed out of the room.  I replied to her with something like,

"Yes, by all means, X.  I can see you  next Monday morning at 10am.  Shall we make an appointment?  Let me have your exam back so I can look it over again."  As an aside, we routinely read and graded 100-150 bluebook exams each, three times per semester at five week intervals.  You can easily understand why professor mandated course protocol stipulated that we reread a student's exam BEFORE talking to them about it in a later appointment  when problems ensued.  But back to my story.

"I can't come and see you next Monday," young Ms. X wailed as the tears started.

"Why not?" I asked, slightly rattled.  "Would 9am be more convenient?  We could do that instead."

"I can't because I'll be in Paris with my parents for the next two weeks, " she keened before falling totally to pieces and limping away, gravely wounded, in the arms of two girlfriends who were also students in the course.  I referred that particular case to my mentor and friend, the late Professor Y, a wiry Danish basso profundo with high cheekbones and curly hair, who talked down the young lady in question once she returned from her French sojourn.

It should be interesting to see who my whiners are in each of my three classes this semester.  As the saying goes, the more things change, the more they stay the same.