One Monday in Mid-October. . . 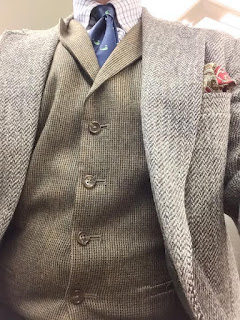 The slightly disheveled upper half this morning.  Yes, those are little green whales on the necktie.  Although it is out of sight here, the bottom button of my vest/waistcoat was indeed left unbuttoned.

Today's irretrievably Bertie Wooster, Bingo Little, and Tuppy Glossop-ish combo.  It's finally cool enough for wool vests/waistcoats, so I laid one out with everything else last night after supper before pressing my shirt.  A male student actually complemented me midday today as I left the building where I had just taught a class, describing everything as "Awesome!"  Nice to know that even some of the young whipper-snappers out there recognize classic combinations when confronted with them.  I've had several similar such comments during the last seven weeks or so from random students while going about my business on campus.  Not necessary of course, but the odd compliment is a nice thing to hear once in a while.  Now enough with the always unintentional alliteration already! 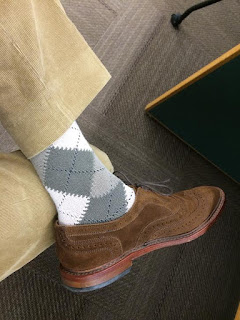 And the lower half, complete with Allen Edmonds suede wingtips/brogues.  Looks like rain the rest of this week, so today was the day to put 'em on and wear 'em.