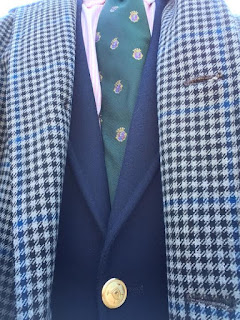 The top half this morning as I killed a little time outside on campus between office hours and then teaching for almost the next four hours.  And now, I need a drink.  Making due with some coffee however.  The overcoat above is an old Botany 500 number that I picked up for less than US$10 a year ago, the blazer is a Polo University Club, and the hand-made green club tie was also thrifted at some point in the not too distant past.

Thirsty Thursday, otherwise known as drinking night and the unofficial start of the weekend around many (most?) college and university campuses in the United States.  A chilly one here in any case this morning, so I opted for wool flannel items and a vintage wool overcoat.   The blazer, pants, and overcoat were all purchased in my old thrift/charity shop down in Central Illinois during the last few years.

There are, apparently, a number of thrift/charity and clothing consignment shops in our new neck of the woods here in southern Michigan, but our lives have been, you could say, rather harried since the return from Germany in mid-August.  I have not yet had time to explore them and see what might be on offer as a result.  No matter.  There is more than enough classic stuff hanging in the wardrobe and spare closet to wear through the rest of Fall, Winter, and on into Springtime, so I'm not too concerned.  After all, once you reach that critical wardrobe mass, how many additional tweed jackets, blazers, and neckties do you really need?  As the great Michael Caine might say, "Know what I mean?" 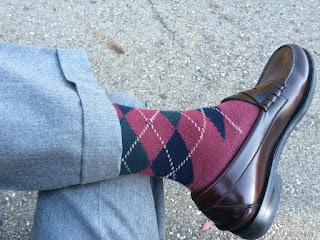 And the bottom half.  The pants are by L.L Bean and were thrifted about 18 months ago.  The shoes?  Sigh.  I had a pair of Allend Edmonds chocolate brown suede wingtips/brogues laid out last night and all ready to go this morning.  Too bad the weather forecast changed overnight, and we ended up having some rain and wet here midday.  Hence the plasticy Johnston and Murphy loafers, which I keep for just such damp days although the rain had not yet arrived when these photographs were taken.