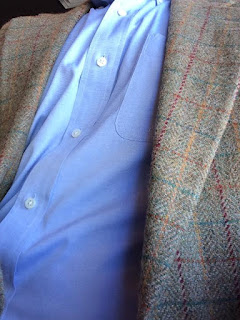 The top half today, including a vintage 'Made in the USA' Land's End genuine Harris Tweed.  Oddly, the shoulders are not as boxy and large as seems to be the case with many of the sports jackets and suit coats sold by LE now.  I purchased this for a few bucks at my favorite thrift/charity shop haunt in our old stomping grounds of Central Illinois late last winter when it was handed to me by another patron much taller that I.  His words were something like, "Here.  This should fit you.  It's a Harris Tweed."  How could I possibly argue with that? 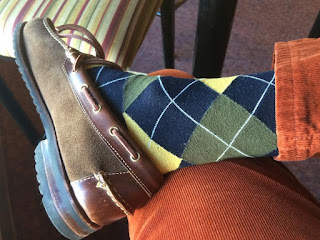 And on the bottom, a pair of suede Allen Edmonds 'Catskill' loafers among other items  My wife, the Grand Duchess, occasionally needles me about these decidedly orange Land's End corduroy jeans, but they're great for the fall and winter.

A long, brilliantly sunny October afternoon avoiding the in-laws, who are in town for the weekend to see the Young Master and the Grand Duchess.  Luckily, I had a ready excuse what with all kinds of paper grading and commenting/suggestions to catch up on as well as planning or the week's classes. It was thus easy to escape to the cafe.  A little coffee and a lot of classic rock along with a smattering of 80s tunes helped keep me on task and able to breeze through everything in about 4.5 hours.

Funny what caffeine along with Jimi Hendrix, Led Zeppelin, The Eagles, Janis Joplin, et al will enable you to get accomplished.  Even funnier how all of these late teens and 20-somethings in the cafe around me seemed  for the most part to know the songs and enjoy the music of these artists even though much of it is at least 35 years old.  Somehow, Lady Gaga, Justin Bieber, and other calculated prefab artistes of our own era ain't quite the same thing.  Know what I mean?  Pharell Williams isn't too bad though.