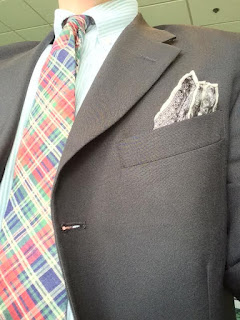 The upper half early today during the as usual unattended (by any students) office hours.  No matter.  A fresh cup of dark roast coffee and the final 35 pages of a novel for one of my courses was a nice way to spend the two hours before heading off to teach.  However. . .  I've had at least four students indicate they will visit me tomorrow (Tuesday) morning.  Can you tell the final paper is almost due?

More than a month before the unofficial start of the summer season -- Memorial Day Weekend here in the U.S. -- but the sun was out most of the day, and it just felt right.  The high temperature for the days was in the mid-70s Fahrenheit after all.  The necktie, by the way, is a Robert Talbott Nordstrom's thrift find, purchased three or four years ago.  Tomorrow, rain, and much cooler temperatures here in Lower Michigan, so I plan to trot out my double breasted wool flannel Glen Plaid number one final time before classes end for the semester on Friday.

So many guys view the prospect of dressing presentably as, oddly, some kind of tortuous chore.  I suggest that if more men learn to have fun with their attire and learn to enjoy dressing nicely, that more might begin to think of wearing items a few notches above jeans, cargo shorts, and sweatpants as something to enjoy.  And, maybe, even aspire to.   I admit that the prevailing attitude that a casual workplace is, somehow, a perk and, somehow, preferable to wearing a tucked in shirt (with an actual collar, a jacket, and a tie) escapes me.  Like, totally. . . 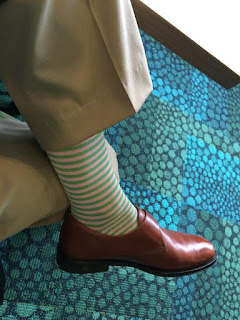 And the lower half today, featuring  a pair of exceedingly comfortable calfskin monkstrap loafers that were purchased from, of all places, Land's End seven or eight years ago.  The vaguely Witchy-Poo socks were purchased on sale from Dapper Classics two or three years ago, and the khaki chinos from Land's End last September.  The new direction LE seems to be taking is a bit sad, because there were always numerous items that the company did well (dress shirts, neckties, some of their dress pants, etc.).  These number fewer and fewer, though, as LE actively courts the the J. Crew-Old Navy customer base.