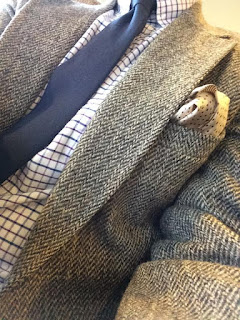 The upper half, featuring a few favorite items that include a thrifted Harris Tweed jacket, a Tattersall OCBD from Land's End (purchased before stiff, plastic collar linings became the norm), a thrifted navy wool tie, and a thrifted silk pocket square.

Well, it might be Spring according to the calendar, but no one seems to have told Mother Nature.  At least not here in Lower Michigan, where it has been cold, gray, and wintry since just after Easter Sunday.  We even continue to have spells of snow, and while nothing has really accumulated enough to get the skis and toboggan out one last time, it has hardly been warm enough to contemplate brushing down, zipping into breathable storage bags, and storing the winter wardrobe while swapping in the warm weather linen, cotton, and wool gabardine.

Too bad, since I have a wonderful new tan three-piece suit by Hart-Shaffner-Marx (Ok, let the Obama tan suit jokes commence!) and a lovely Ralph Lauren Blue Label linen suit, for which I splurged, that I'm eager to wear, but we are rapidly running out of time.  Our current semester finishes here at the end of April, and there are painfully few reasons to dress nicely in professional clothing during the warmer summer months.  Sigh.  Another time I guess.  Maybe at the end of August when the fall semester begins once more?

So, although I have been contemplating making the twice yearly wardrobe switch for two weeks now, I have continued to rely on tweed, corduroy, and occasionally heavier wool flannel suits.  I am especially pleased with the overall look of today's combination of items.  Some days, my look, admittedly, doesn't quite nail it since I don't always think too much about what I throw together early in the mornings.  And of course, you later catch sight of yourself in the men's room mirror and think, "Oh, my!  That's a little busy."  This morning, however, the stars seemed to have been a bit more in line.  See what you think.


P.S.
The title of today's post has to do with a power outage that has knocked out much of the MSU campus.  As you might expect, that has thrown a rather large wrench in the works since so many of us rely now on WiFi and use of laptop computers in our teaching to conduct classes and lectures.  And no one seems to know exactly how long it will take to fix the problem either.  Needless to say, it took some doing to escape the faculty/staff parking lot where my car was located. 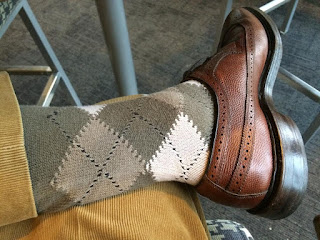 And here is the lower half, featuring those comfy, 12-year old golden tan dress cords from Land's End, a pair of Argyle socks I've had for years, and Allen Edmonds longwing brogues, one of my most comfortable pars of shoes.