A Friday Meeting in March Style. . . 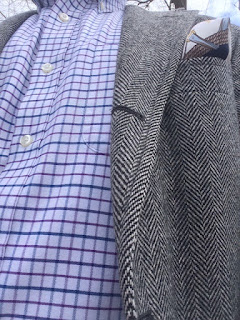 The upper half on this chilly Friday afternoon. 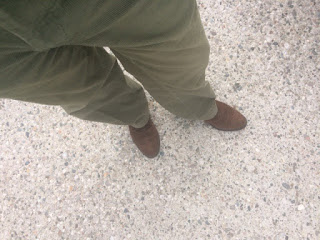 And the lower half, featuring a pair of well-worn olive corduroy pants and some suede Allen Edmonds brogues.  The unseen suede belt matches the shoes. 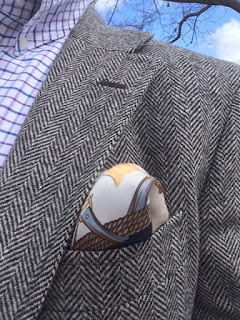 A close-up of today's pocket square in use.  Now, the funny thing about this particular pocket square, which gets a lot of use,  is this. . . 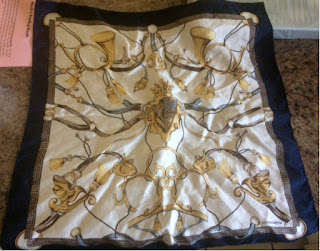 It's really a small lady's silk scarf (Surprise!), but at about 17" square, it's just the right size to masqerade as a pocket square.  Not really that much difference between the two items when you think about it though.  I stumbled upon it six or eight years ago in a thrift/charity shop for 50 cents or a dollar, and it works nicely in repurposed form.

Normally, I am not on campus most Fridays since most of my courses are of the Monday through Thursday variety.  Occasionally, however, there is reason to make the 15-minute trip into campus for some committee meeting, faculty learning group,  visiting scholar presentation, or similar event, all of which provide a nice excuse to shower, shave, and make myself somewhat more presentable than the usual rugby top and corduroy jeans for Fridays at home between late October and mid-May each year.

Here's an example of today's get-up for very early Spring.  Once you reach a critical mass of sorts with classic menswear, it's really easy to mix and match and toss on an interesting combination of clothes without too much thought.  And voila. . .  Instant semi-responsible and capable adult!   Or at least the appearance thereof.

We know otherwise, don't we?