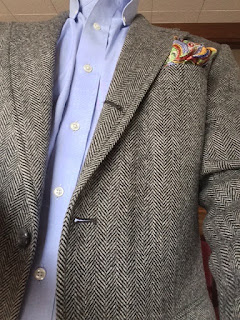 Saturday shuttle style -- or 'Mama Taxi' a Spanish friend of ours used to call it -- above, featuring an OCBD shirt from L.L. Bean, 3/2 tweed jacket from J. Press, and the pocket square from the folks at Put This On, which sadly has made a distinct move into so called dad and/or workwear style during the last couple of years.  PTO seems to have lost sight of its original raison d'etre -- how to dress like a grown-up -- that so resonated with me back in 2009 or '10 when first I stumbled upon it. 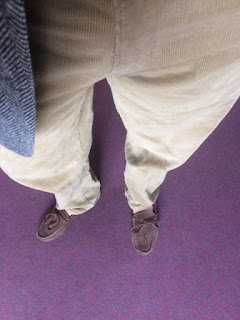 And the bottom half, featuring Land's End corduroy jeans and suede camp moccasins by Allen Edmonds.    Not visible is a red and navy surcingle belt from Leatherman, which was a Father's Day gift two or three years ago.

The Grand Duchess has been away at some conference for university administrators since the middle of the week, so ol' yours truly shuttled The Young Master to his Tae Kwon Do and piano lessons midday after we enjoyed a late breakfast of eggs, sausage, and English muffins with orange juice together at the dining table.  The Young Master likes a three-minute egg.  Not really soft-boiled any longer, but not quite hard-boiled either.  I'd like to think Raymond Chandler and Dashiell Hammet might still approve.


The martial arts studio that our son is now a member of is very clever in the way that they incentivize children to keep at it, and The Young Master earned his first (black) stripe for breaking a board with a well-placed forward kick today.  The clear emphasis on positive choices, self-discipline, and self-awareness, as well as respect for oneself and others is fabulous, and just the thing our rather spirited child needs at 9.5 years of age.  There are some cognitive and learning disabilities present in our son too, so any help we can get with focus and compliance is most welcome.

What my wife and I  also really appreciate is the studio's additional stress on physical and mental fitness rather than an over-reliance on technological gadgetry, which is pervasive now.  The pull of television seems almost quaint by comparison.  But already, we have noted a number of positive changes in The Young Master during the last month, so we plan to continue with this as long as he remains interested.

If the possibility exists, I would heartily recommend martial arts training of some sort for other children as added support for parents when it comes to instilling good habits and either heading off, or stopping potential problems before they start.  Goodness knows there are enough potential stumbling blocks out there for young people in 2019.


As far as today's attire goes, it's just one more variation on what I have either observed on older male family members throughout my life and/or worn since my teens when ol' Mom would occasionally show up with a blazer, tweed jacket, a pair of loafers, or similar for the young me.

This process began roughly during my twelfth year.  Invariably, there was also a calm, concise explanation to me as to why items like these are occasionally necessary in a man's closet even when he does not wear a suit or 'dress up' every day.  My mother, I now realize, was just as instrumental in my sartorial training as my father, maternal grandfather, various uncles, and great uncles up and down the eastern seaboard.

The specific look highlighted above is both comfortable and relaxed yet versatile.  You don't really look or feel out of place anywhere.  These days, a sports jacket and corduroy jeans would be right at home in most casual workplaces Monday through Friday, and the combination works equally well for weekend errands,  evenings out, or just hanging around the house on a quiet afternoon although I exchanged the jacket and shirt for one of my lighter rugby pull-overs once we returned home.

In any case, it's amazing what a  sports jacket, a pair of casual leather shoes, and a tucked in shirt with a belt can do to transform any guy regardless of his age, weight, or height.  It always astounds me that so many men have managed somehow to reach adulthood without picking up on this reasonably simple fact of life.