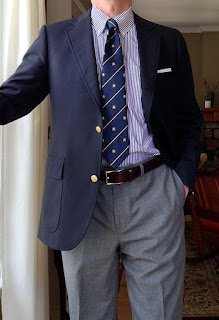 Not my photograph, but it provides a useful illustration for today's post.  If it is yours, and you would rather that I not use it, just leave a (polite) comment, and I'll remove the photo forthwith.


This last week, which was Spring Break Week, was to have included a jaunt down to Pinehurst, North Carolina to visit good ol' Mom and see the new digs --  just off Pinehurst Three -- that she and Step-Dad purchased late last summer.  Alas, my mother had a rather serious health scare just prior to our convergence at Raleigh-Durham International.

Although we both made it from our respective points on the globe and spent the week together, the general mood was rather less lighthearted than might otherwise have been the case.  Still, things are in hand at the moment, and while I have had to return home for the start of classes on Monday next week, my sister has driven down from Washington, D.C. to help our mother navigate a series of further medical tests that will lead to an eventual course of treatment and path forward at the start of next week.

Which brings us to the focus of this particular blog entry.  How one looks still matters when it comes to how others perceive and interact with you.  Goldman-Sachs' recent move toward a more casual workplace notwithstanding, you cannot go wrong with a blazer, oxford cloth button-down shirt, creased khakis, and penny loafers for air travel.

I cannot begin to describe the better than average treatment I met everywhere on both legs of the trip.  And I'd like to think that the fact that I was dressed just a little bit better than every other schlubb with his or her posterior/stomach hanging out for all to see regardless of age had something to do with it.  Ticketing agents, TSA people, gate agents, and flight attendants all went that extra little distance, something they are not required to do by any means, as I made my way from Michigan to North Carolina and back again.  The difference was difficult not to notice, yet people get angry at those of us foolish enough to point out things like this.

While it is clearly no longer necessary to pull oneself together for air travel, and most do not even when representing their company on the road (I could count on the fingers of one hand the number of working aged men in sports jackets or suits who I noticed during this trip), dressing better than you absolutely must cannot hurt.  It's just one of the many ways to grease the wheels of social interaction in our otherwise slovenly era.

The convenient thing about about the navy blazer-OCBD-khaki-penny loafer combo I describe is that it is easy to kick things up a few notches for more serious business.  I packed two neckties, two extra OCBD shirts, and two extra pairs of predominantly navy dress socks, both of which came in handy for meetings with Mom's attorney in Pinehurst and several doctors.

I have found over the years -- and don't forget I once dressed the part of a big-haired, denim clad, working class rocker masquerading as a forklift driver -- that so called professionals interact differently with you when you are dressed and come across like you have education, polish, and sophistication of your own to bring to the table.  Having been on both sides of the sartorial and cultural fence, and having life experience as both an "anywhere" and a "somewhere," the difference is tangible like it or not.  Dressing a cut or three above everyone else makes a difference.