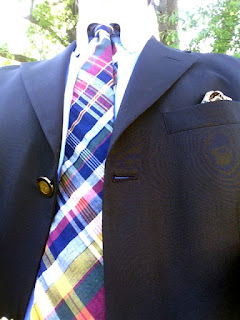 The upper half this morning, featuring a vintage Madras necktie, dyed and sewn in Sri Lanka, from Rooster.  The navy blazer -- with University of Wisconsin buttons added  a couple of years ago -- is a light weight wool number that I actually purchased a dozen or more years ago while visiting Mom and Stepdad one Christmas in Mexico when I needed a jacket for a New Year's Eve dinner party to which we were invited.  It's perfect for warm weather. The blitzed OCBD shirt is one of five or six of various weights in light blue that I come back to again and again. 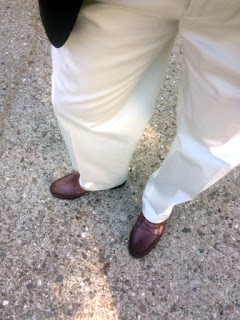 And the lower half featuring some recently moisturized and buffed penny loafers from Allen Edmonds and some Land's End dress chinos in a light stone.  During the late spring, summers, and early fall, I come back to some iteration of the items featured today over and over again.


As I have written -- ok, lamented -- here before at Classic Style, once the spring semester and finals week concludes at the start of May each year, there is woefully little opportunity to dress more presentably than a short sleeved Madras, seersucker, twill, or knit polo shirt with some chino shorts and my ever present leather deck shoes until things crank up again in late August.

This morning, however, the four 3rd Grade classes at The Young Master's school presented their animal research posters in the gym, and parents were invited to attend.  A perfect opportunity to pull myself together and venture out into the world looking slightly crisper than has been the case for the last month or so since my own classes ended.  It's hard to go wrong with a light-weight navy blazer, khakis, loafers, and a Madras necktie on sunny mornings like this one.

At school, The Young Master did amazingly well given the noise levels and throngs of milling children and parents.  His poster that we worked on together here at home for a couple of weeks during the latter half of May was well-received.   He even talked to several adults about Siberian tigers and also toured the gym himself to examine the posters presented by other children before silliness took over, and he retired to another room with his aide for a quick break to collect himself before returning to the fray.  I took the opportunity to touch base with his current teacher Mr. H., thank him for a good year, and shake hands.

All in all, it was an enjoyable experience this morning, and The Young Master has made terrific strides since Kindergarten.  I wonder what changes and progress are in store for the the 4th Grade next fall?