What's Your Approach to Life? 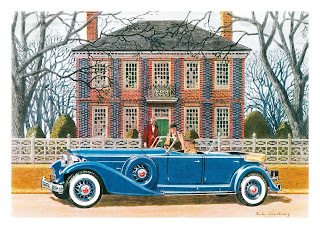 Another Leslie Saalburg illustration from decades ago.  An idealized image, yes, but the house depicted is kind of nice.  The car ain't too bad either.  A 1933 Packard I believe.

Naysayers might counter that most of  the qualities listed above, much like the illustrations accompanying this post, are themselves impossible ideals.  I would argue that it is entirely possible not only to aspire to such concepts, but to come pretty darn close to living them provided a person exercises careful forethought.

I suppose, however, that it depends on one's frame of reference and related vision of how life can be.  Do we really want to give up on the game before we've even tossed our hat in the ring, and continue wallowing in the metaphoric primeval green miasma and sludge that engulfs so many in the 21st century?  Or would we prefer to pull ourselves out of that very same ooze and cultivate a more pleasant life? And no, we're not talking about having piles of the filthy lucre here, but rather principles.  The bedrock, perhaps, of classic style.

As The Grand Duchess and I point out so often to The Young Master, during those more difficult episodes that parents out there will be familiar with, you have a choice.  Either X or Y.  It's up to you.  But be aware that your choices have (sometimes unintended) consequences, which might influence other areas of your life.  Choose wisely, in other words, to avoid complications, disappointment , or just plain trouble down the road.  So much in life is tied to that notion of forethought.  Or lack thereof.

As for wallowing in the primordial ooze versus a more pleasant existence, I know which of the two I'll opt for.

We can also add other qualities to the above list.  Concepts that aren't much talked about anymore, for example patience, curiosity, integrity, compassion, empathy, loyalty, conscience, character, courage, honor, and respect [Thanks to Mature Style for the inspiration].  Let's also add critical thought (for ourselves) to the mix.

If we take pains to cultivate these qualities in ourselves, and in our children, along with the aforementioned traits of calm, quiet, understatement, moderation, sophistication, elegance, refinement, discernment, polish, grooming, restraint, kindness, gentility, and care, then it strikes me that a person will be well on the way to living stylishly as well as fostering that same approach to life in the next generation while at the same time avoiding the overt and tacky garishness that characterizes so much of what passes for societal discourse in 2019.

You'll notice too that the almighty $$$ has very little to do with the points I highlight, so the oft heard protest that an elegant life requires scads of money is a moot point.  People who make that tired argument are looking at the issue in the most superficial way.  In the broadest sense, style and sophistication are more about what's on the inside, and how we channel those various attributes in our approach to life, than they are about trappings like navy blazers, leather dress shoes, stately houses, and vintage luxury automobiles.  Those kinds of items are nice, but they are just things after all.

This is not to suggest, in anyway, that we shouldn't bother improving our external presentation.  But in the ongoing collective effort to look and behave like we have more than an ounce of sophistication, we need to be aware that we must also strive to be (-come) well-rounded individuals.  In other words, we cannot ignore the internal at the expense of the external.

To do so risks gross oversimplification of the broad concept of 'Style' and achieves very little.  We might all look a whole lot better than society does at present (maybe), but like Henrik Ibsen's Peer Gynt (1867), there won't be much more to us than that.  Like an onion, once the shiny skin has been stripped away, all we are left with is a pungent and rather unpleasant inside that leaves a bad taste in its wake.  Not much more than that.  Male versions of the externally attractive, but totally vapid and complacent Stepford Wives (1975) to put it another way.  Surely, that is not how we want to come across to others.  Or is it? 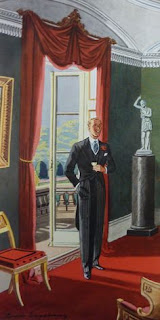 Another idealized image this gray, cool Saturday afternoon, but it conveys the right idea.